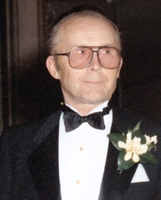 Well-known State College builder, entrepreneur, and philanthropist Alex Woskob died peacefully at home in his sleep at the age of 97 in the company of his beloved wife Helen on May 27, 2019. Alex truly lived a rich and storied life, much of which is described in detail in his book, Memoirs of My Life (WUS Publishers, 2004). His wife Helen also relates many fascinating stories of her own life's tribulations, joys, and life together with Alex in her own memoir, Freedom and Beyond: A Ukrainian Woman's Journey to a New Life in America (Piramida Publishers, 2015).

Alex was born Oleksiy Woskobijnyk in the resort town of Myrhorod in the Poltava region of Ukraine on March 13, 1922 to an independent farming family. His mother Maryna gave birth to two other sons: Mykhailo (who later became a professor of history in the U.S.) and Ivan (who became a builder in Philadelphia). As a young adult, Alex gained recognition for his talents in electrical engineering and was assigned to work as manager of an electric power plant in Myrhorod and in Lviv in western Ukraine.

The Soviet regime persecuted Alex's father Hryhory along with other independent Ukrainian farmers during forced collectivization and executed him in 1937 during Joseph Stalin's great terror. Alex was six years old when his mother Maryna, and his brothers Mykhailo and Ivan were forced out of their home in the middle of a winter night during collectivization. After many years of trying to survive they were forced to flee their homeland Ukraine during World War II because of the continued persecution by both the Nazis and Soviets. Following the Allied victory Alex's family lived in a displaced persons camp in Germany, and Alex was given the opportunity to study at the University of Munich for three years. In early 1949 Alex made a lifechanging decision to immigrate to Canada, where he took a job as an electrical engineer at Westinghouse. While Alex was working in Canada, his older brother Mykhailo, who was still in Germany, sent him a photo of a smart and beautiful young woman whom he thought might be of interest to his brother as a prospective life partner. Alex fell in love at first sight with the woman in the picture his brother sent of Halya (Helen) Drobot and decided to return to Germany to convince her with unwavering persistence to marry him. Alex kept that small picture of Helen in his wallet as a keepsake for the rest of his life. Alex and Helen were wed on January 27, 1950 in Germany, and soon after Helen followed her new husband to Canada where they began their family with the birth of their first child Laura and where Alex began learning the building business.

Alex moved the family to Philadelphia in 1953 where he started a construction company, I&A Corporation, with his brother Ivan. Alex and Helen continued to grow their business and family with three more sons, George, Alexander, and Victor. With the original long Ukrainian family name of Woskobijnyk difficult to pronounce for Americans, Alex and Helen decided to legally shorten it to Woskob. In 1964 Alex and his wife Helen became partners in business when they decided to construct modern high-rise buildings in State College, PA. Their company, AW & Sons, first built a seven story complex called Parkway Plaza. The apartments were the first of their kind in State College. Alex built his buildings with his own crew, hands on, with his own styled brick and block construction. Working in close partnership with his wife Helen enabled Alex to achieve the success of his dreams. AW & Sons proceeded to become a leader in providing high quality student housing one block from campus and continues to serve thousands of students each year.

Alex developed a special love of the community in State College where he settled with his family. He was a special man to many people. He and Helen have been extensive patrons of the arts at Penn State with support for numerous musical, artistic, and cultural events. The Woskob Family Gallery in Penn State's Downtown Theatre bears their name. Alex and Helen also made numerous contributions to support Ukrainian culture through the establishment of the Bahriany Foundation, through contributions to Ukrainian democracy-oriented and church organizations, and through major contributions to The Pennsylvania State University to establish the The New Century Fund in the College of Agricultural Sciences and the Woskob Family Endowment in Ukrainian Studies in the College of Liberal Arts.

Alex loved his native Ukraine dearly with all his heart. He also loved his adopted homeland in America, too, for all the freedom and opportunities it offered him. Alex truly lived the American dream and will always be remembered as a hard-working, kind, generous, and wonderful man, beloved by his family, his friends, and the State College community. He is survived by a large extended family: his wife Helen Woskob, his son George Woskob with his wife Nina and their three children Larissa Castner, George A. Woskob, and Alexander B. Woskob; their daughter Laura Alexander with her son Nicholas Alexander and two daughters Alexa Gryschuk and Larissa Vale; their deceased son Victor M. Woskob's four sons – Victor A. Woskob, Ashlee C. Woskob, Jonathan D. Woskob, and Alexander G. Woskob; and seven great-grandchildren – Helena Woskob, Tiyanna Woskob, Nataliya Woskob, Alyssa Woskob, Hanna Woskob, Chase Woskob, and James Elabd. Alex's two brothers Mykhailo and Ivan predeceased him along with two of his sons, Alexander and Victor.

In lieu of flowers the family requests that contributions be made to The New Century Fund in the College of Agricultural Sciences at Penn State, c/o Rick Roush, Dean, College of Ag Sciences, 201 Ag Admin Building, University Park, Pa. 16802.

The viewing will be:

The funeral will be at: