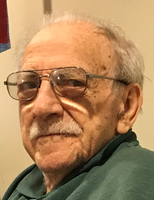 Carmen Joseph Terrizzi, 89, of State College, passed away peacefully on Sunday, April 12, 2020, at Centre Crest Nursing Home. Born May 11, 1930, in Barnesboro, PA, he was the son of the late Guisseppe and Nicolina (Morsillo) Terrizzi. On January 3, 1953, at Saint Joseph's Mission Church, St. Benedict, he married Bernice Bogus, who survives. Also surviving are four children, Janice Youngblood (Tom), Davis, WV, Rick Terrizzi (Leeane), Houston, TX, Ann McGlaughlin (Ron), State College, Ray Terrizzi (Georgi), State College; one sister, Ellen Leslie; nine grandchildren, Thomas Youngblood (Krista), Matthew Youngblood (Crystal), Jaci Booth (Scott), Lauren Terrizzi, Lindsey Terrizzi, Alec McGlaughlin (Alanna), Caitlin McGlaughlin, Jordan Terrizzi and Ryan Terrizzi, and five great grandchildren. In addition to his parents, he was preceded in death by six brothers Angelo, Anthony, Francis, Samuel, Joseph and James Terrizzi and two sisters, Carmella Mento and Mary Ann Terrizzi. He was a 1948 graduate of Barnesboro High School. After graduation he worked for Acme grocery stores and was a member of the Navy Reserves. Carmen worked for many years as a Store Manager for Wolf Furniture Co. He retired from Wolf's in 1989 as a District Manager. Carmen enjoyed the daily interaction with his customers and employees, actively volunteered in the communities in which he lived and was a gentleman to everyone he met. He was a member of Our Lady of Victory Catholic Church where he served as an usher for many years. Carmen was a lifetime member of the Knights of Columbus (4th Degree) and Rotary International. He enjoyed spending time with family and friends, watching the Steelers and the Pirates, helping with Knights of Columbus bingo, gardening and, most of all, sitting on the porch swing with his loving wife, Bernice. He will be greatly missed by all those who knew and loved him. A memorial service will be held at Our Lady of Victory Catholic Church at a later date. Burial will be in Saint Benedict Roman Catholic Cemetery, Carrolltown, PA. Memorial contributions may be made to the Alzheimer's Association and the Centre Care building fund. Arrangements are under the care of Koch Funeral Home, State College. Online condolences and signing of the guest book may be entered at www.kochfuneralhome.com.