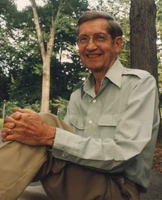 Robert Martin Gruver, 100, of State College, died peacefully on Monday, May 31, 2021, at Foxdale Village surrounded by people who loved him.

He was born on March 6, 1921 in York, and was the son of Martin Henry Gruver and Esther Louise (Kraber) Gruver. He graduated from William Penn Senior High School in 1939 where he won three letters on the varsity tennis team. He attended Penn State University and graduated in 1944 with a B.S. in Chemistry. He was a member of Pi Kappa Alpha fraternity. He attended Penn State for his Master's Degree in Ceramic Science where he met Norma Lee Hoover in a class he was teaching. Their relationship developed while working in Penn State Players theatre group. They were married on June 29, 1946 and shared 40 years together. He received his Ph.D. in Ceramic Science from the University of Missouri, Rolla in 1956. He helped found and was the technical director of Linden Labs which later became Ceramic Finishing. Later he joined Penn State's Food Science Department as their scanning electron microscopist. He loved working with scientific equipment and was in charge of teaching graduate students. The faculty and grad students relied on his knowledge of making this equipment work. Bob was a member of several professional organizations.

Bob was a quiet independent man who knew his own mind. He loved living and exploring in nature or in the middle of New York City. He fearlessly tried whatever was new. He was into health foods before they were trendy. He loved walking in the woods and searching for plants and animals. Norma Lee and Bob shared the joy of identifying new wild plants. He was known as the man who looked under rocks and showed you a snake or a salamander he found there. He enjoyed

teaching children about the wild animals he had in his care so they would learn to treat them with care and respect. Searching for the first flowers of spring with the Pennsylvania Native Plant Society was one of his joys. He was instrumental in the rebirth of that society along with George Beatty. He was a fifty year member of the Sons of The American Revolution, his ancestors arriving in York County around 1700. He held offices in the State College and the state S.A.R. He was one of the first members of the State College Coin Club and was an expert in both U.S. coins and paper money. He was on the boards of Clearwater Conservancy and The Centre County Historical Society. He was the first male to receive the State College Branch of the American Association of University Women volunteer of the year award in 1993 for his work with the AAUW book sale. Because he loved working with engines he was an early member of the Nittany Valley Machinery Association and faithfully attended their shows every year until he was 97. He was a strong supporter of Penn State because of the educational opportunities it offered. He was especially excited when the new Arboretum became a reality and visited it often to see what was blooming and became one of its donors.

Robert was preceded in death by his parents and by his wife, Norma Lee, in 1986. When asked what his greatest accomplishment was in life he would reply that it was marrying her. He is survived by one daughter, Lee Gruver of State College who carries on his love of nature and tries not to eat too much sugar per his admonition. There will be a public grave side service at Greenmount Cemetery in York, PA at 11 a.m., on Wednesday, June 16, 2021.

To honor Bob Gruver go into the woods or onto the shoreline or down an intriguing city street and search for interesting things and enjoy the experience. Memorial contributions can be made to: The Pennsylvania

Arrangements are under the care of Koch Funeral Home, State College. Online condolences and signing the guest book may be entered at www.kochfuneralhome.com or visit us on Facebook.