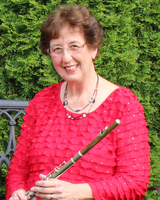 Diane was born on May 20, 1941, in Rochester, NY, the daughter of the late Kenneth and Agnes Low Wehner. She is survived by her husband, Smith C. Toulson, III, whom she married on December 18, 1994. In addition to her husband, Diane is survived by her twin children, Julia N. Gold and her husband Andrew W. Kuklis of State College; Daniel P. Gold and his wife Kim N. Gold of Portland, OR; one sister, Kathy Turner and her husband Cordell of Churchville, NY; three grandchildren, Hannah D. Glaister, Max P. Gold Stachowski and Asher E. Gold; and one great-granddaughter, Kaylee R. Glaister. She was preceded in death by her first husband, L. Peter Gold, in 2004; and her daughter, Barbara J. Gold, in 2011.

Diane graduated from Spencerport High School in New York in 1958. She earned her bachelor's degree in 1962 from Eastman School of Music, and her master's degree in 1964 from Columbia University Teacher's College. She was fortunate to discover her passion for flute and piano early in life and had a lifelong career as a professional musician and teacher. Her active musical career encompassing both the classical and jazz genres, paired with her love of travel, led to performances throughout the US, Europe, and South America, with the Huntington Trio of Philadelphia, Easterly Chamber Players, Camerata Amistad, Zephyr Trio and Air Dynamics. She was principal flute and founding member of the Nittany Valley Symphony, as well as principal flute for the Altoona Symphony, and York Symphony for many years. Diane was also actively involved with the Penns Woods Music Festival and National Flute Association conventions.

She started her teaching career in State College at The Music Academy in 1965 and also enjoyed teaching at Bucknell University, Juniata College, York College, and Lehigh University in addition to maintaining a thriving private studio. Although Diane was a member of Unitarian Universalist Fellowship of Centre County, for the last several years she played the organ for the First Church of Christ Scientist. Her musical contributions to the community were varied and far-reaching. For those who knew Diane, her zest for life was contagious and greatly admired.

Her family would like to express their heartfelt thanks for the help and loving support shared with Diane and the family during her last months.

A Celebration of Life will be held later this summer.