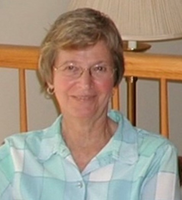 Born July 25, 1928, in Sparta, Wisconsin, Jane graduated from Sparta High School in 1946. She attended University of Wisconsin, where she graduated with honors in 1950 with a B.S. in Dietetics. During her time at University of Wisconsin, Jane met future husband John Buzzell, and they married on August 19, 1950. The new couple moved to Forest Park, IL, where Jane interned at the VA Hospital. Upon moving to Iowa City in 1951, while John worked on his PhD at University of Iowa, Jane was employed at the Residence Hall and then the Iowa City VA Hospital from 1951-1955.

Upon completion of John's PhD, Jane and John lived in Red Bank, NJ from 1955-1973 before relocating to Towanda, PA from 1973-1989. As she raised her three children (Chris, Mark, and Jill), Jane was also active in the community, volunteering with the Towanda United Methodist Church, Meals on Wheels, and the Bradford County Extension, where she taught nutrition classes. Jane took pride in the fact that she never missed her children's sporting events, where she was typically seen knitting; a nervous habit she would only recently admit to.

In addition to being a devoted grandmother, Jane enjoyed the creativity and comradery of her State College quilting group, where she made dear friends (and beautiful quilts) for over 20 years. A 1998 move into Foxdale Village didn't deter Jane's interests in gardening, knitting, quilting, and cooking. Her tomato plants and vegetable gardens were viewed with admiration, while her dedication to her flower garden was evident to all who walked by. A dedicated old-fashioned letter writer, Jane maintained lifelong pen pals, including a "round robin" group of twelve college friends who wrote letters for seven decades. Sadly, Jane is the last of that group of correspondents.

Jane is survived by her husband, John G. Buzzell, to whom she was married for 70 years, her children Chris (Lynnette) Buzzell of Milwaukee, WI; Mark (Rachel) Buzzell of State College, PA; and Jill (John) Semmer of Berwyn, PA; seven grandchildren, and three great-grandchildren. Jane is also survived by her brother, Howard "Boots" Teasdale, but was preceded in death by her beloved sisters, Abby Olsen and Nancy Gruner.

A Celebration of Life will be held at 1 p.m., on Sunday, September 12, 2021 at the Foxdale Village Auditorium, 500 East Marylyn Avenue, State College.

In lieu of flowers, the family invites those wishing to honor Jane to join them in contributing to Wesley Foundation at State College Saint Paul's United Methodist Church or the Foxdale Employee Education Fund.