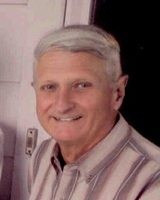 Lewis Thomas Rusnak, 84, of Port Matilda, passed away peacefully at his daughter's home in Pennsylvania Furnace on Saturday, August 14, 2021.

Lou graduated from Morrisdale High School in 1954. He then went on to serve in the United States Air Force for over 12 years, including 8 years flying B-47's in the Strategic Air Command. Lou also served one tour in Vietnam flying reconnaissance missions, during which time he was awarded the Distinguished Flying Cross. After leaving the Air Force in 1969, Lou started his career with the State College Police Department while at the same time taking classes and completing his bachelor's degree at Penn State in criminal justice. Finally in 1998, after 28 years, Lou retired from the police department. He remained a member of the Fraternal Order of Police. After retirement, Lou could be seen on his boat at the lake or walking on the boardwalk at his favorite place on earth, Ocean City, MD.

He is survived by four children, Lewis Mark Rusnak and his fiancé, Sue Flick, of Bellefonte, James Rusnak of State College, David Alan Rusnak and his wife, Pam of Pittsburgh, and Laura Wicks and her husband, Brian of Pennsylvania Furnace; eight grandchildren, Scott Rusnak, Mark Rusnak, Katelyn Rusnak, Taylor Rusnak, David P. Rusnak, Ali Wicks, Zoe Wicks, and Mia Wicks; four great-grandchildren, and three sisters, Dorothy Sullivan and her husband, Al of Highlands Ranch, Colorado, Barbara Long and her husband, Jim of Philipsburg, and Mary Louise Cowder of Moon Twsp. In addition to his parents, Lou was preceded in death by a son, Timothy Rusnak, and a brother, Thomas Rusnak.