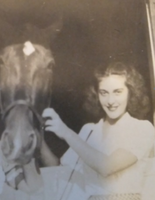 Patricia Henry Simmet of State College passed away on September 28, 2021.

She was born July 31, 1927 in Subury and graduated from Sunbury High School in 1946. She worked as a secretary for the Defense Department in Washington, D.C. from 1948 to 1956. In September of 1951 she married William H. Simmet and lived in Silver Spring, Maryland. They moved to State College in 1965 when he accepted a position as house council for HRB Singer.

She is survived by three children; William H. Jr. of Honey Brook, PA., Suzanne Fye of State College, and Patrick Simmet of Huntingdon, PA. A third son, Thomas, died in 1974. She is survived by seven grandchildren and one great-grandchild.

Upon her husband's death in 1977, she worked in the College of Education at Pennsylvania State University from 1979 until 1991 and was state Registrar of Vital Statistics for the Department of Health from 1977 until 2008.

She was a member of Our Lady of Victory Church in State College.

Memorial services at Koch Funeral Home will be private.