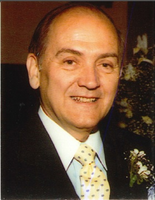 William "Bill" E. Babcock passed away on September 30, 2021, his 97th birthday. He resided at The Kensington Falls Church in Falls Church, VA. He was born in Greenville, PA and was the only child of Thomas C. and Florence (Book) Babcock. His beloved wife of 70 years, Dorothy, died in 2017 at the age of 92. They are survived by daughters Carol (Thomas) Cosimano of Falls Church, VA and Dorothy (Paul) Lloyd of Tempe, AZ. Their middle daughter, Nancy, passed away in 2018. Also surviving are grandchildren Valerie (Robert) Taylor, Jeffery Cosimano, Matt Lloyd, Samantha Lloyd and great-grandchildren Grace, Aaron, and Lillian Taylor, and several nieces and nephews.

It was discovered through the genealogical research of elder Dorothy and daughter, Dottie, that Bill was a direct descendent of William Bradford of the Mayflower. Governor Bradford's great-great-granddaughter married John Babcock in 1748/49, thus beginning Bill Babcock's lineage.

Bill graduated from Penn High school in Greenville. He enjoyed raising homing pigeons to race competitively. In 1942 he enrolled in Thiel College where he met his future wife, Dorothy. When the United States entered World War II, he was deferred for a short time because of his science major. When such deferments were eliminated, he applied and was accepted into the Merchant Marine Academy at Kings Point, Long Island. His ships made six crossings to Europe and carried troops and supplies back and forth across the Atlantic.

When WWII concluded, Bill returned to Thiel College to finish his degree. He also continued to see Dorothy, who had been a faithful letter writer. They graduated from Thiel in 1947 and were married later that summer.

Upon graduation, Bill worked at Westinghouse, but became interested in teaching and, eventually, administration. He first taught science and then, became principal at Conneaut Lake Junior-Senior High School in western PA. Next, the family moved to New Wilmington where he was principal of the junior-senior high school. In 1957, the family moved to State College where he became the Junior High principal at the Fraser Street School. During this time, he earned a Master's degree and a Doctorate from Penn State. In the State College district, he held the positions of Director of Instruction, Assistant Superintendent, and Superintendent. He remained Superintendent for 17 years, retiring in 1984.

Following retirement, Bill was Chief Operating Officer of the local Business Incubator operated by the Chamber of Commerce. It began in Matternville School and made several moves as it grew. During his tenure, companies such as Restek, Sound Technology, Keystone Scientific and Broadband were formed. Many of these companies employed hundreds of local residents and became internationally known.

Bill was also a long-time member of the local Kiwanis Club and many other local and state education, business and civic organizations.

Upon Bill's retirement, a colleague wrote, "…I will remember your wise counsel, your never- failing patience, your steady firmness, your ever willingness to listen, your deep devotion to duty, but most of all your kindly understanding – for all of these I am truly grateful. I shall always think of you as the epitome of the old Chinese proverb – "He knew excellently how to be a real person."

To Dad and Mom: Your daughters were so lucky to have been raised with such love and guidance. You gave us both roots and wings and we are forever grateful.

The family would also like to thank VITAS Hospice and the entire staff of the Kensington Falls Church for the loving care of and support for our dad during his stay there.

Burial will take place at the Shenango Valley Cemetery in Greenville, PA.

Memorial contributions may be made to the charity of your choice.