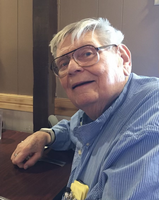 Carl "Bud" Volz, Jr. passed away peacefully at his residence at Centre Cares in Bellefonte, PA on Saturday Oct. 9, 2021. Carl was born in Pittsburgh, PA on Sept. 23, 1938. He was the son of Carl Volz, Sr. and Helen Gougoulis Volz. When he was a young child, his family moved to State College, and, with the exception of a brief time in Altoona, Carl was a resident of Centre County for the rest of his life. During high school, Carl met his future wife, Helen Louise Breon. Carl was a member of the State College Area High School graduating class of 1955 and an "honorary" member of the class of 1954, Helen's class. Carl and Helen were married in August of 1958, after Helen graduated from Penn State. Carl went on to earn an Associate's Degree from Penn State, Altoona Campus. After moving back to Centre County, Carl became an important member of the State College Community. In addition to working full-time as an electronics designer for Electronic Services at Penn State, he worked for decades as the Chief Engineer at WMAJ/ WXLR. It was in this role that Carl helped to foster the careers of many people who went on to become leaders in the industry. In addition, Carl served as an unofficial consultant to the Vice President of Engineering at Capital Cities Broadcasting Corporation. Carl's love of audio and the art of radio gave him his greatest career satisfaction. This love extended beyond his vocation, however. He never missed an opportunity to volunteer to repair sound equipment or to build an amplifier. After retiring from Penn State and WMAJ/WXLR, Carl continued to focus on his love of sound by working as a senior designer for Emotive Audio Designs, a company he co-founded with his son. Whether working in radio or audio design, Carl earned a reputation for superb quality of work. He earned top reviews for his designs in international publications. From the time he was a young child, Carl was fascinated by HAM radio. He was a decades-long member of the Nittany Amateur Radio Club and the Quarter Century Wireless Association. Known by his call sign W3SMV, Carl spent many happy hours communicating with others, whether by voice or Morse Code. Carl's love of music led to a life-long passion for the violin, and the bass viol, and the mandolin, and the tuba! Starting in school, Carl was very active in band and orchestra. He continued to hone his skills by participating in many musical endeavors including community theater productions, weddings, and programs at church. Carl was an active member of Grace United Methodist Church in Centre Hall, PA and the Unitarian Universalist Fellowship of Centre County. He participated in musical programs including choir in both congregations. Carl was an incredible father who fostered in his children a deep respect for curiosity, humor and helping others. Carl was predeceased by his beloved Helen in 2015. He is survived by his son and daughter-in-law, Frederick C. Volz and Maureen C. Volz; daughter and son-in-law, Kira Volz Rensch and Mark B. Rensch; and three granddaughters, Alena C. Rensch, Amelia E. Rensch, and Kathleen A. Volz. He is also survived by his sister, Ruth Waters of Palo Alto, CA, and his brother, Alvin C. Volz of York, PA. In addition, he is survived by six nieces, four nephews, and their families. Carl's children would like to thank his caregivers at Centre Cares, Juniper Village and Fresenius Kidney Care for providing comfort in his final days. The family will hold a memorial service and inurnment on a later date. Those wishing to donate in Carl's honor are encouraged to consider Centre Cares, 250 Persia Road, Bellefonte, PA 16823 or any of the organizations mentioned in the above article. Arrangements are under the care of Koch Funeral Home, State College, PA Online condolences may be entered at www.kochfuneralhome.com.