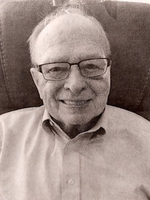 Born August 4, 1930, in State College, he was the son of the late Bruce Ewing and Ruth Herman Dreibelbis

Don was a graduate of State College Area High School. He served in the Army during the Korean War. After being discharged married Nancy Doerner (Jordan) in 1953.

He was a farmer on the same farm that he was born and raised, milking 100 head of cows and raising 15,000 chickens.

Don later became an auctioneer and auctioned from the same farm known as Park Crest Farms in State College.

Don was a member of St. Peter's United Church of Christ. He served on the Pine Hall Cemetery Board, was a member of the Mason's and the Elk Lodge 1600 of State College. After retirement he enjoyed golfing and spending time with family.

Memorial contributions may be made to the Alzheimer's Association by visiting https://act.alz.org