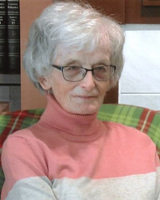 Audrey lived in Cheswick and Springdale during her public school years. She was a member of the Springdale high school marching band, graduating in 1949. From 1949 to 1951, she attended Westminster College in New Wilmington, PA. During this time, Audrey was in the marching band and worked part-time in the President's office.

For 3 ½ years, she was a technical secretary at Gulf Oil Research and Development Laboratories.

Audrey's parents and she moved to Saxonburg, where her father established Adamson's Drug Store. She worked weekends and evenings in the store. Audrey met and married Donald in Saxonburg.

In 1954, they moved to State College, where Donald was a high school teacher for 35 years. He was also Coordinator for Occupational Education.

Audrey, in addition to being a wife and mother, served as a volunteer for 14 years in the Centre Community Hospital snack bar as a cashier. She was active with the Lemont Women's Club, as well as other local organizations.

Her hobbies included playing bridge, reading and travel. She was a member of the Huntingdon Presbyterian Church.

Burial will be in Centre County Memorial Park with Reverend Harold Williams officiating.