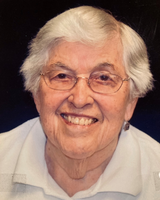 Born in Harrisburg on July 22, 1930, she was the daughter of Robert E. and Marjorie H. Scheffer. After graduating from the Katherine Sweeney Day School (where her mother taught), she went north to Smith College in Massachusetts, majoring in music and minoring in education. Upon receiving her degree in 1951, she worked for several years as a music teacher at a private girls school in Cleveland, Ohio. She worked summers as a lifeguard at Eagles Mere Lake in Sullivan County, PA, where she met her future husband. They wed in 1954, settling in the suburbs just north of Baltimore, where they lived for almost 50 years and raised their family.

Susanne put down deep Maryland roots and became an avid Baltimorean. She relished a neighborhood crab feast, singing with the Handel Choir and other choral groups, refinishing salvaged furniture, knitting sweaters, hats and mittens for anyone and everyone, and sustaining a vast crew of beautiful houseplants. In addition to managing her husband's small dental practice, she worked formally in early childhood education at a church preschool and later as Director of Bolton Hill Nursery in Baltimore City. Over the years, Susanne contributed her abundant skills and energy to groups and causes she cared about, including the Arc Baltimore, the Smith College Club of Baltimore's fabled annual Book Sale, a childcare co-op for international student families at Johns Hopkins University, the Irvine Nature Center and the Eagles Mere Conservancy.

In 2003, Susanne and her husband moved to Lewisburg, PA. She appreciated easier proximity to their vacation home in their beloved Eagles Mere, renewed connections to Pennsylvania landscapes and history, and time with family and friends, old and new. In 2016, she moved to State College to be nearer to her daughters. A highlight of Susanne's time living at Juniper Village at Brookline was her participation in Juniper's Perennial Players, including their uplifting senior musical theatre productions of Guys and Dolls and Singing in the Rain.

In addition to her parents, Susanne was predeceased by a daughter Christina S. Hinrichs, her one sister Frances S. Dortch, and her husband of 59 years, Ernest Henry Hinrichs. She is survived and dearly missed by her daughters C. Clare Hinrichs (Thomas Richard) and Gail H. Heyn (Pinhas), all of State College, and a son Robert P. Hinrix of Seattle, WA; as well as grandchildren Aviva Heyn (Sivan Carmi), Ben Heyn (Tzlil Mordechai), Karen Heyn, Timothy Richard, Elaine Hinrichs, and Fern Hinrix; and great-grandchildren Ella and Mika Carmi-Heyn, and Yonatan Heyn.

A celebration of life will take place in Eagles Mere, PA in the summer of 2022.