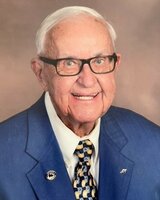 Robert (Bob) I. Forbes, 96, of Boalsburg, PA went to his heavenly home March 27, 2022 from his residence at Wynwood House Nittany Valley. Born March 17, 1926 in Southwest, PA, he was the son of Adam Watson Forbes and Ethel Everett Forbes who both preceded him in death. He married Laura Jane Marie, May 1, 1952 who preceded him in death. His brother, William Johnson Forbes also predeceased him. Bob was a graduate of Hurst High School, in which he took great pride. He was honorably discharged after serving in the United States Navy. He took an early retirement to care for Laura in her illness after more than 30 years of service to Daimler Chrysler. He was a member of The Greensburg Masonic Lodge #225 for 63 years. He was also member of Lions Club International, National College Football Hall of Fame, Penn State Nittany Lion Club, and Lifetime Member of the Penn State Alumni Association. Bob held dear his membership with Methodist churches near his residences over the years and during his summers in Ocean City, New Jersey. His commitment was evident in his participation and devotion to serving the Lord. He was an avid Penn State University sports enthusiast as well as a fan of Pittsburgh sports teams. He loved golf. He was a devoted friend to many and loved being in service, whether at his church, at the Penn State Sports Museum, in the many organizations with which he was involved, or as a friend to those in need. He was a proud Scotsman; his Scotty dogs were his devoted companions over the years. A celebration of Bob's life will be held at 10:00 a.m. on Friday, April 22, 2022 at St. Paul's United Methodist Church in State College, PA with Senior Pastor Rev. Greg Milinovich officiating. Interment will be in St. Clair Cemetery, Greensburg, PA. In lieu of flowers, donations can be made to St. Paul's United Methodist Church.