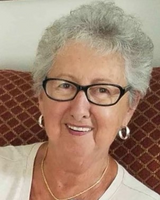 Born February 1, 1938, in Renovo, she was the daughter of the late Orlando and Julia Drugatz Tassa. On April 10, 1998 she married Daniel Venturato, who survives. They enjoyed 24 wonderful years of marriage while traveling and spending time with their expanding family and friends.

Pauline graduated from St. Josephs Catholic School in Renova in 1955. She worked as a clerk at A&P Food Company and Locust Inc. She was a member of Our Lady of Victory Catholic Church, the Catholic Daughters of America, the HOA Board of English Meadows, and the Elks Lodge.

Visitation will be on May 6th, from 10:30-11:30 am, at Our Lady of Victory Catholic Church, 820 Westerly Parkway, State College. Memorial service and Mass will follow at 11:30 with Father George Jakopac officiating.

Burial will be in St. Josephs Catholic Cemetery, Hyner, PA at 3:00 pm.