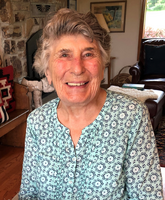 Jo Anne (Jody) Richardson of Linden Hall, Pennsylvania, passed away after a brief illness May 23, 2022, in Hershey, Pennsylvania. Her daughters Elizabeth and Lou Anne were her constant companions giving her love and care in her final days.

Jody was born August 30, 1932, in Los Angeles, California. She was the only child of Marion (Jim) and Emma Deaver. Jody's character was strongly shaped by experiences provided by her father's life. He was multi-talented and adventurous, traveling the west with family in tow working at times as a cowboy, rodeo rider, ranch owner, bartender, saloon owner, and Hollywood extra. Jody was a child of the rural and small-town west, living in the mountains and deserts of Arizona, California, Oregon, and later in Santa Fe where she graduated from Santa Fe High in 1951. Many of her favorite memories from her youth came from the years when her father was ranching near Palm Springs, California and working as an extra in Western movies. Jody rubbed elbows and made friends as a young girl with Hollywood stars.

Jody's adventures continued through her life. She spent most of her adult life and raised her family in Albuquerque, New Mexico. She was a mother of three, teacher, florist, realtor, entrepreneur, and traveler. She was the proprietor of the iconic Old Town Albuquerque gift shop, the Cinnamon Stick.

As a young girl and women Jody was an accomplished equestrian. She had a great love of horses throughout her life. She had an exceptional talent for design and eye for unique art. She was an expert in flower arrangements, home décor, gardens, and merchandizing. She loved to travel and experience new things, especially when she could share the experiences with loved ones. With her beloved husband, Charles Edward (Ed) Richardson, she traveled the lower forty-eight states extensively. Their favorite mode of travel was a camper van. They enjoyed the pace and intimacy of taking the side roads to soak in the history, culture, and beauty of the land while seeing family and friends and making new friends along the way. Jody and Ed also visited Alaska, Canada, China, Italy, Austria, Mexico, and the United Kingdom.

Jody's life gave her a treasure trove of wonderful stories of family, places, and adventures. Fortunately for those who knew her, she was an avid storyteller who painted in words vivid and memorable pictures of her life and those she shared it with.

Jody moved to Pennsylvania in 2017 after the passing of her husband Ed, where she lived with her daughter Lou Anne and Lou Anne's husband Jim. Jody was a strong woman who survived cancer and provided for her family. She was generous, forgiving, and lively. She remained active and independent to the end.

The family will have a private memorial. Jody's ashes will be interred with those of her husband Ed at the Santa Fe National Cemetery. In lieu of flowers, the family requests donations to Animal Humane in Albuquerque (https://animalhumanenm.org/), Centre Co. PAWs (https://www.centrecountypaws.org/), or other animal welfare organization. Online condolences may be provided by visiting www.kochfuneralhome.com.