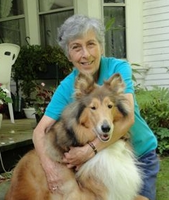 Adrina J. Cassel, 91, of Rumney, New Hampshire, died August 8, 2022 in State College, Pennsylvania. She died peacefully at home with her family and beloved Sheltie, Willa, by her side. Adrina was born on March 29, 1931 in Tyngsborough, Massachusetts. She was raised by her cherished parents and uncle on the family's dairy farm. In 1953, Adrina married Donald Cassel who preceded her in death. Adrina is survived by three children: Lori Cassel of Pennsylvania; Eric Cassel of Connecticut; and Edna Miller of Maine. She is survived by three grandchildren: Alice Fay of New Jersey; Kolby Miller of New Hampshire and Lucy Miller of Vermont. Adrina is also survived by her siblings, Christine McLaughlin of New Hampshire and Kenneth Times of Massachusetts. Adrina graduated from Lowell High School with the honor of class Salutatorian. She attended Simmons College in Boston, Massachusetts where she majored in chemistry. After graduating, she worked as a chemist for DuPont in Wilmington, Delaware. It was at this stage in her life that Adrina met her husband, Donald. They lived on the family dairy farm in Coatesville, Pennsylvania, where they started a family. After selling the family farm, Adrina and Donald raised their family in Pennsylvania and Delaware. Adrina returned to college to obtain her teaching certificate in secondary mathematics. She entered the teaching profession which she greatly enjoyed until her retirement. With family ties to New England and a strong love for winter sports, Adrina and Donald decided to move to Rumney, New Hampshire in 1978 where they embraced the joys of small town living and experiencing the beauty of the White Mountains. Adrina was a member of the Starr King Unitarian Universalist Fellowship and the Silver Streaks ski group. She enjoyed knitting, hiking, skiing, playing bridge, and spending time with her collie dogs. Adrina had exemplary baking skills and enjoyed baking treats for her family and friends. She was an advocate for protecting the environment. A memorial service for Adrina will be held privately at a later date. In lieu of flowers, donations in memory of Adrina can be made to Byron G. Merrill Library, 10 Buffalo Road, Rumney, NH 03266 and Centre County PAWS, 1401 Trout Road, State College, PA 16801. Arrangements are under the care of Koch Funeral Home, State College, Pennsylvania. Online condolences and signing of the guest book may be entered on their website.