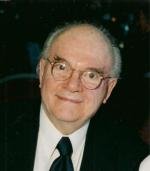 Francis J. Vastola, age 82, born in Buffalo, New York, eldest son of the late Samuel and Harriet Brayman Vastola, passed peacefully at the Atrium today, to another dimension to be with his Lord and family. In the middle of his college years he joined the Navy as an ET3 to repair the electronics on submarines. He then worked in Washington DC at the National Bureau of Standards in the Gas-Chemistry Section, where he helped preserve the Declaration of Independence by placing it into a sealed gas-controlled environment in which it remains today. Schools he attended were St. Joseph Collegiate Institute, the University of Buffalo, and Penn State University where he earned a PhD in Fuel Science. He stayed at PSU as an Assistant Professor and retired Professor Emeritus in 1986. After retirement, he did consulting and helped teach several Elderhostels at Penn State. As a hobby, he programmed software for the early computers, and had one of the first computers on campus. He is best known for his work in mass spectrometry for which he is listed in Who's Who in the East. His favorite pastimes were telling jokes at the dinner table, working on computers, electronics, sports cars, and watching old-time movies. He served as a Treasurer for the Science Fiction Club in Washington DC, a Treasurer for the University Club in State College, and a Treasurer/Assistant Treasurer for the 29ers men's stock group. At the Village, where he lived the last five years of his life, he served as Chairman of the Residents' Energy Committee and President of the Residents' Council (2009). He is survived by his wife, Ruth; his brother Samuel, wife Inge; niece Jennifer Soley, husband Steve, two children; nephew Alex, three children; nephew Andrew; and cousin Franklyn, wife Rose, three children. Memorial contributions may be sent to the Frank J. and Ruth J. Vastola Award in Fuel Science, 116 Deike Building, University Park, Pa 16802. A memorial service will be held privately for the family.