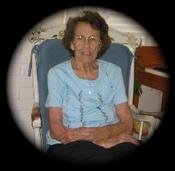 Betty Spearly Wolford passed away on Monday March 14, 2011 at the home of her son, Michael, in Manassas Park, Virginia surrounded by family. Born in Bush Addition near Bellefonte on April 4, 1922, she was the daughter of the late Harry Sank Spearly and Ethel Brennan Spearly. Betty was preceded in death by her husband, of 68 years, Allen Harter Wolford, who passed away in May 2010. Mrs. Wolford was a charter member of the Mount Nittany United Methodist Church in Lemont, where she had been active for many years in the music programs singing in the choir. Her favorite hymn was "In the Garden". Betty was a graduate of State College High School class of 1940 and worked several years as a secretary before becoming a full time homemaker and mother. Betty was a member of the Lewistown Chapter No. 283 Order of the Eastern Star. Betty is survived by her son Michael Wolford and his wife, Jeanne, of Manassas Park, Va.; three grandchildren, Rebekah Jean Gasiorowski and her husband Todd, of Lake Jackson, Tex., Sarah Lynn Fletcher and her husband, Aaron, of Manassas Park, Va., and Seth Allen Wolford and his wife, Sara, of Front Royal, Va.; three great-grandchildren, David Allen and Ryan Todd Gasiorowski of Lake Jackson, Tex., and Penelope Jane Wolford of Front Royal, Va.; a brother William Spearly of State College, a nephew Scott Spearly of Bellefonte, and a niece Linda Zubler of Hummelstown. Betty is survived by many other family members who loved her and will miss her a great deal. Friends will be received from 9:30 to 10:30 a.m. on Saturday, March 19, 2011, at Mount Nittany United Methodist Church, 1500 East Branch Road, State College. Her funeral service will be held at 10:30 a.m. at the church with Rev. Howard T. Woodruff officiating. A graveside service will follow at Meyers Cemetery, rural Bellefonte, In lieu of flowers, the family request that donations be made to the Shriner's Hospital for Children. Donations can be made by calling 800-241-4438 or sending donations, in Betty memory, to Shriner's Hospital for Children Headquarters, 2900 Rocky Point Drive, Tampa, FL 23607.