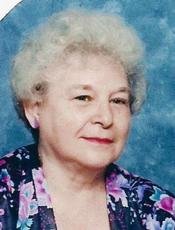 Thelma J. Lehr, 86, of Pa Furnace, died Sunday, May 8, 2011, at The Hearthside, State College. Born August 20, 1924, in Federalsburg, MD, she was the daughter of the late Charles H. and Vera E. Shaw Brown. She is survived by two children, Bruce E. Lehr and his wife, Cynthia, of Pa Furnace, John C. Lehr, of Williamsport, two sisters, Ella Bucek, of New Jersey, Sadie Cope, of North Carolina; Four grandchildren, Kathryn Beck, Amanda and Matthew Lehr, and Erika Young, three great-grandchildren, Jonathan and Gavin Young and Rachel Beck. She was predeceased in death by three brothers, Charles Brown, Clair Brown, Paul Brown, and one daughter-in-law Joan Lehr. She was a 1941 graduate of Shickshinny High School. Thelma was previously a resident manager at Park Forest Apartments and Forest Edge Townhouses. She then retired after ten years of service from Penn State University Alumni Career Services as the Employment Placement Specialist. She was a member of the State College Christian Church. A Memorial Service will be held at 2:00 P.M., on Sunday, May 15, 2011 at Koch Funeral Home, 2401 S. Atherton St., State College with Pastor Vince Smith officiating. The family will receive friends at the funeral home following the service. Burial will be in Pike's Creek Cemetery in Sweet Valley. Memorial contributions may be made to the State College Christian Church at 1107 Williams St. State College, PA 16801.
To send flowers to the family or plant a tree in memory of Thelma Lehr, please visit Tribute Store

A Memorial Tree was planted for Thelma
We are deeply sorry for your loss ~ the staff at Koch Funeral Home
Join in honoring their life - plant a memorial tree
Services for Thelma Lehr
There are no events scheduled. You can still show your support by sending flowers directly to the family, or planting a memorial tree in memory of Thelma Lehr.
Visit the Tribute Store
Print
Share A Memory
Send Flowers
Plant a Tree