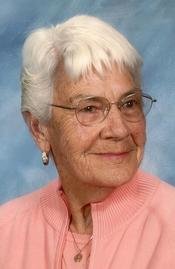 Ruth E. Fuller, 89, of State College, died Wednesday, May 18, 2011. Born February 13, 1922 in Monongahela, Pa, she was the daughter of the late James W. Valenson and Irene P. Fawcett. She married William F. Fuller, in 1957. He preceded her in death in 2005. She is survived by her children: Patrica Parise and her husband Edward Staub of Calcultta, Ohio; Frederick Parise of Cleveland, Ohio, and Mary Kay Fuller of London, England. In addition to caring for her family, Ruth spent much of her time volunteering at the hospital, State College schools and Grace Lutheran church; however, bridge, golf and cooking were her life-long passions. An avid golfer and member of the Elks Country Club for decades, she had to wait until age 79 for her first hole-in-one there. She reluctantly gave up that sport in her early 80's but never gave up her love of bridge and cooking. She was active in several local bridge groups, including Hospital Bridge. Her children wish to thank June Krumerine, her sister-friend, for her unwavering devotion to their Mother's needs, especially over the past year, and also to Pastor Steve Lynn who helped her live and die in peace. Memorial services will be held at the Grace Lutheran Church, 205 South Garner Street, State College on Monday May 23rd at 1:30pm with Pastor Steve Lynn officiating. A luncheon in Harkins Hall of the church will be held for friends and family following the service. Prior to the church service, a private burial will be held in Centre County Memorial Park. In lieu of flowers, memorial contributions can be made to the Grace Lutheran Church, 205 S. Garner Street, State College PA 16801 or to a charity of your choice.
To send flowers to the family or plant a tree in memory of Ruth Fuller, please visit Tribute Store

A Memorial Tree was planted for Ruth
We are deeply sorry for your loss ~ the staff at Koch Funeral Home
Join in honoring their life - plant a memorial tree
Services for Ruth Fuller
There are no events scheduled. You can still show your support by sending flowers directly to the family, or planting a memorial tree in memory of Ruth Fuller.
Visit the Tribute Store
Print
Share A Memory
Send Flowers
Plant a Tree