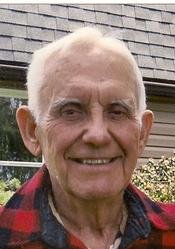 Dr. Cyril L. Velkoff, 92, of Warriors Mark, died Saturday, May 21, 2011, at the Fairways at Brookline Village Born October 26, 1918, in Chicago, Ill., he was the son of the late Metodi and Louisa Beck Velkoff. On November 1, 1947, he married Catharine L. Price , who preceded him in death on May 9, 2005. Dr. Velkoff grew up in Ft. Wayne, Ind., attended Indiana Univ. in Bloomington, Ind., and transferred to George Washington Univ., Washington, D.C. and received his B.A. in 1941. He entered the medical school and graduated with his M.D. and his commission in the army medical corps at the same ceremony in 1944. He then served in the Pacific War Theatre as a Battalion Aid Surgeon until his return to the States in 1947 and was discharged from service at Ft. Hayes, Columbus, Ohio. Upon discharge from the service in 1947, he began his specialty training at the George Washington Univ. Medical Center in surgery. The family moved to Philadelphia and there his training continued at the Graduate School of the Univ. of Pennsylvania. He received a senior fellowship in surgery at the Lahey Clinic in Boston. After its completion, it was followed by an Oncologic Fellowship in surgery at the Sloan-Kettering Institute in New York. The family moved back to Philadelphia, where Dr. Velkoff joined a surgical practice in the City. In 1974, a change in career was brought about by a traumatic injury to his hand. He joined the staff at the Hahnemann Hospital & Medical College as a trainee in the department of Pathology. Upon completion of this program, he moved to State College and joined the staff at Centre Community Hospital and served in the Anatomic Pathology Dept. until his retirement in 1984. Dr. Velkoff was made a member of the Alpha Omega Alpha honor society and the A.F.A King Society at the medical school. He was a member of the Philadelphia City Medical Society and the Pa. State Med Society. He was an active member of the Philadelphia College of Physicians and the ¬Philadelphia Surgical Soc. His memberships include the Lahey Alumni Soc. and the Ewing Soc. of the Sloan-Kettering Institute. He served as a volunteer consultant in the Dept. of Rehab. Medicine in the College of Education at Penn State, and was a member of Phi Delta Theta fraternity. He is survived by four children, Hank Velkoff and his wife, Cheryl, of Warriors Mark, C. Townsend Velkoff and his wife, Lois of Muncy, Jeremy Velkoff and his wife, Diane, of Elverson, and Catharine Zelonis and her husband, Carl, of Naperville, Illinois. He is also survived by six grandchildren, Anna Velkoff Freeman, Zachary Velkoff, and Danielle, Lauren, Samantha, and Colin Velkoff. He is also survived by his beloved dog, Heidi. He was a member of the Pine Grove Mills Presbyterian Church. Visitation will be 10 to 11 a.m. on Wednesday, June 1, 2011, at the Pine Grove Mills Presbyterian Church. A memorial service will be at 11 a.m. following the visitation at the church with Rev. Carl D. Campbell officiating. Burial will be in the Moravian Memorial Cemetery in Canadensis and will be private at the convenience of the family. Memorial contributions may be made to the Pine Grove Mills Presbyterian Church, PO Box 241, Pine Grove Mille, PA 16868. The family wishes to express their sincere gratitude to Brookline, Houck Care, and her Home Nursing Agency Hospice for the excellent care they gave to their father. Arrangements are under the care of Koch Funeral Home, State College. Online condolences may be made at www.kochfuneralhome.com.
To send flowers to the family or plant a tree in memory of Dr. Velkoff, please visit Tribute Store

A Memorial Tree was planted for Dr.
We are deeply sorry for your loss ~ the staff at Koch Funeral Home
Join in honoring their life - plant a memorial tree
Services for Dr. Velkoff
There are no events scheduled. You can still show your support by sending flowers directly to the family, or planting a memorial tree in memory of Dr. Velkoff.
Visit the Tribute Store
Print
Share A Memory
Send Flowers
Plant a Tree