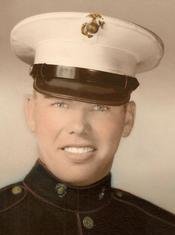 Clarence "Sonny" E. Jackson, 77, of State College, died Friday, July 8, 2011 at his residence. Born November 28, 1933, he was the son of the late Clarence A. and Isadora Williams Jackson. Along with his parents he was preceded in death by his wife, Janice Bostian and a sister. He is survived by four children, Gary E. Jackson, of State College, Cathy L. Benner and her husband, David, of Bellefonte, Ricky L. Jackson and his wife, Jean, of State College, Lorrie A. Kelligher and her husband, Ken, of Bellefonte, eight grandchildren, Taushia Jackson, Brodi, Trey and Chantel McCloskey, Ricky Jr., Daniel and Matthew Jackson, John Kelligher, twelve great grandchildren, Amber, Cody, Erica, Julie, Kyla, Madison, Haden, Alston, Jaden, Mya, Evan and Kaylee; two brothers, Charles Jackson, of Pa Furnace, and Danny Jackson and his wife, Barbara, of Howard. He served in the US Marines from 1953-1956. Clarence worked as a Meter Repairman for the State College Water Authority. He was member of the VFW, NRA, American Legion and worked with his brother doing oil tank removals. Visitation will be 6-8 p.m., Monday, July 11, 2011 at Koch Funeral Home, 2401 S. Atherton St., State College. Funeral service will be 11:00 a.m., Tuesday, July 12, 2011 at the funeral home with Pastor Douglas Mottin officiating. Burial will be in Centre County Memorial Park. Memorial contributions may be made to the National Rifle Association at 11250 Waples Mill Road, Fairfax, VA 22030. Arrangements are under the care of Koch Funeral Home, State College. Online condolences may be made at www.kochfuneralhome.com.
To send flowers to the family or plant a tree in memory of Clarence Jackson, please visit Tribute Store
Services for Clarence Jackson
There are no events scheduled. You can still show your support by sending flowers directly to the family, or planting a memorial tree in memory of Clarence Jackson.
Visit the Tribute Store
Print
Share A Memory
Send Flowers