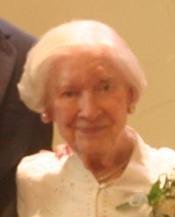 Virginia 'Ginny' Grace Davidson May 30, 1926 - July 14, 2011 Virginia Grace Davidson, 85, left this earth for a better place, on Thursday, July 14, 2011. Ginny's children, Nance & Joe, were at her side at the Geisinger Medical Center in Danville. She died from complications from a recent surgery. Ginny was born at home on May 30, 1926, at Pleasant Hill near Burnt Cabins, Pa. Her parents were Genevieve Mae Morrow and Walter Wesley Parson. Also included in her family were eight other siblings as well as great-grandparents sometimes living at the family farm. Ginny attended a one-room school in Pleasant Hills. The highest grade that she could attend was 8th. She insisted on a higher education so she moved to Orbisonia in 9th grade. Again, in 11th grade she moved to Mount Union and graduated from Captain Jack High School in 1944. She lived with her aunt and assisted with cooking dinner and working at her aunt's grocery store. Ginny played flute and piccolo in the high school band. She continued on with additional education at Thompson Business Institute in Harrisburg where she excelled in shorthand and typing. She was the first member of her family to graduate from high school. She set her goals on obtaining a lucrative job and moved to the Harrisburg area where she worked for a plumbing supply company. This is where she met her first husband, George Arthur Schwartz. They fell in love and were married. She and George had two children, Nance Joan and William George. Her husband died in 1956 while on a family vacation. The family dynamics had to shift rather quickly so Ginny took her skills to the job market and landed a position at Erie Technical Ceramics, where she worked as an executive secretary. Through a lot of support and help from her family and neighbors, she was able to keep her home and raise her children. In 1959, she found a life partner and married Richard Paul Davidson. Together they developed, owned and operated Davidson's Florist and Gifts on College Avenue in State College. Ginny excelled at running the office and obtained additional training in flower design at Penn State and computer training at State College Adult Education. Together they were members of the State College Presbyterian Church and Centre Hills Country Club. After Dick died in 1988, Ginny lived a peaceful and quiet life. She enjoyed all of her birds, especially cardinals. Also, she excelled with her puzzle books. She always looked forward to seeing her caregiver, Julie Danna. They would compete with each other each visit by working on the Jumbo that was in the CDT. She was a proficient channel surfer and loved her TV shows, especially Wheel of Fortune, Jeopardy and Millionaire. She and her son, Bill, kept up with discussing sports, especially Penn State sports and golf. Ginny is survived by a large family. Children, Nance Joan Glantz and her husband, John, of Saxton, William George Davidson, of Winter Garden, Fla., Joseph Lee Davidson and his wife, Wendy, of State College; grandchildren, Nicole Butler, Corinne Stonier, Joseph Tindal and his wife, Anne, Courtney Lang and her husband Scott, Cortlyn Johnson, Cory, Brittany and Hayden Davidson; great grandchildren, Kyla Butler, Emily and Elizabeth Stonier, Samuel, Abby and Katie Tindal. Ginny's living room was filled with family pictures. Surviving family members are siblings, Barbara Hill, Thomas Parson and his wife, Emma, Ronald Parson and his wife Judy. Also, in-laws, Joan Schwartz Prescott, Joyce Enders Schwartz, and Tom Davidson and his wife, Donna. Ginny's son, Richard Paul Davidson predeceased her. Ginny lived her life on her own terms. She believed in staying on a healthy strict diet and daily exercise. She said that her only vice was eating Haagen-Dazs chocolate peanut butter ice cream each day. Recently she helped with and attended her granddaughter's wedding and that was perhaps the best time for her because she was surrounded by family love and happiness. She was a wonderful human being, kind and considerate of all those around her. Memorial contributions may be made to Meals on Meals by check or credit card. www.scmow.org; or mailed to PO Box 1235, State College, PA 16804. Friends will be received at the Koch Funeral Home, 2401 S. Atherton St., State College, on Monday from 5-8 p.m. Funeral service will be held on Tuesday at the funeral home starting at 11 a.m. with Pastor Ed Zeiders officiating. Read more: http://www.legacy.com/obituaries/centredaily/obituary.aspx?n=virginia-grace-davidson-ginny&pid=152552039#ixzz1SH7LFpFk
To send flowers to the family or plant a tree in memory of Virginia Davidson, please visit Tribute Store
Services for Virginia Davidson
There are no events scheduled. You can still show your support by sending flowers directly to the family, or planting a memorial tree in memory of Virginia Davidson.
Visit the Tribute Store
Print
Share A Memory
Send Flowers