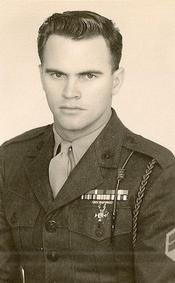 Kenneth Floyd Walker, 67 went to be with the Lord on July 16, 2011, after a yearlong courageous battle with cancer. Born August 14, 1943 in Bellefonte PA, he was the eldest child of Kenneth Henry and Betty Jean Walker who preceded him in death along with a sister Amy Lynn. He is a 1963 graduate of State College Area High School. He joined the US Marine Corp (1964-1968) and served two tours of duty in Vietnam and received three purple hearts. In 1984 he joined the PA Army National Guard (Bellefonte Unit) and retired in 2004 with 20 years of service. He was admired by all the soldiers he served with. He was employed as a meat cutter at several local grocery stores. On September 18, 1987, he married Diann Lovell Walker at Grace Lutheran Church who survives at home along with a granddaughter, Ashley Ford and beloved dog, Ginger. He is also survived by three children, Kenny Walker (Veronica) of Summerville SC, Larry Walker (Lana) of State College, and Sherry Calkins (Clay) of Athens OH, also three stepsons Ric Ford (Jena) of Pittsburgh, Greg Ford (Audrey) Lakewood CO, and Christopher Ford (TommieJean) Yelm WA. He has 9 grandchildren, Bailey, Ryden, Rowan and Rainey Walker, and Ashley, Brandon, Holden, Caley, and Brenna Ford. He is also survived by sisters and brothers, Carol Smith, Mildred Dreese, Peggy Haines, George Walker and Danny Walker, along with many nieces and nephews. In addition to proudly serving his country, Ken also enjoyed Karate (2nd degree black belt) landscaping, hiking, bike riding, history, classic movies, volunteering at VA Hospital (Altoona), Church Softball league, day trips with his wife and spending time with all his grandchildren. Memorial Service will be held at Grace Lutheran Church on Tuesday, July 19, 2011 with a Military Service starting at 10:45am in the narthex, followed by the memorial service at 11am. Final burial will be at Arlington National Cemetery. In lieu of flowers, memorial contributions can be made to Grace Lutheran Church, 205 South Garner Street, State College, PA 16801 or Centre County PAWS, 1401 Trout Road, State College, PA 16801. Arrangements are under the care of Koch Funeral Home, State College. Online condolences may be made at www.kochfuneralhome.com.
To send flowers to the family or plant a tree in memory of Kenneth Walker, please visit Tribute Store
Services for Kenneth Walker
There are no events scheduled. You can still show your support by sending flowers directly to the family, or planting a memorial tree in memory of Kenneth Walker.
Visit the Tribute Store
Print
Share A Memory
Send Flowers