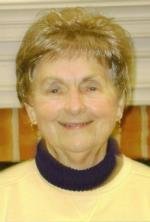 Josephine (Jo) Rumberger Moore-Houser, 83, died Tuesday, December 28, 2010, at Elmcroft of State College. She was born May 30, 1927, in Halfmoon Valley, Center Line, Huntingdon County, Warriors Mark. She was the daughter of the late J. H. Blaine and Nellie Gray Rumberger. She was united in marriage to Robert P. Moore who died June 18, 1999. On February 14, 2004, she was united in marriage to Norman E. Houser, who died May 22, 2009. She was a member of the Mount Nittany United Methodist Church in Lemont. She was also a member and Past Matron of the State College Order of the Eastern Star and a Past District Deputy of Eastern Star Pennsylvania, a member of State College Past Matron's Association, Halfmoon Grange #290, and a life-member of the Mount Nittany Medical Center Auxiliary, United Commercial Travelers and the Blue Course Ladies Golf League. She was instrumental in organizing the Warriors Mark-Franklin School Alumni Association, which sponsors an annual scholarship at the Tyrone Area High School. She graduated in 1946 from the former Warriors Mark-Franklin High School and from the Altoona School of Commerce in 1947. From 1947 until her retirement in 1983, she was employed at the Pennsylvania State University in the Departments of Zoology and Entomology, Biology and Computer Science. She is survived by four sisters, Teddie Wineland of Martinsburg, Doris Bickle of Brookville, Martha Colbert of Milesburg, and Donna Rumberger, D.D.S. of New York City; a brother Jesse Rumberger and his wife, Shirley of Bradenton, Fla., and a special nephew, Lee Pressler. Along with her parents and husbands, she was predeceased by two sisters, Marjorie Pressler and Melissa Jane Sipes, and a brother, Clarence Rumberger. A memorial service will be at 11 a.m. on Friday, December 31, 2010 at the Mount Nittany United Methodist Church with the Rev. Howard Woodruff officiating. Friends will be received at the church after the service. Burial will be in Spring Mount Church of the Brethren Cemetery at Cross Roads at the convenience of her family. At Jo's request flowers are to be omitted. Those who desire may make a contribution to the Building fund, Mount Nittany United Methodist Church, 1500 E. Branch Road, State College, PA 16801. Jo's sparking appearance and smile will be sorely missed, but her spirit will be a source of comfort and joy to all fortunate enough to have known and loved her.
To send flowers to the family or plant a tree in memory of Josephine Moore-Houser, please visit Tribute Store
Services for Josephine Moore-Houser
There are no events scheduled. You can still show your support by sending flowers directly to the family, or planting a memorial tree in memory of Josephine Moore-Houser.
Visit the Tribute Store
Print
Share A Memory
Send Flowers