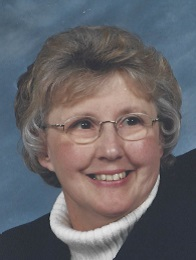 Marie Kay Hargrove, 75, of State College, died Tuesday, December 25, 2018, at The Village at Penn State Atrium. Born March 5, 1943, in Fort Dodge, IA, she was the daughter of the late Henry Andrew and Dora Lena (Merkle) Marty. On November 27, 1964 she married George L. Hargrove, who survives at home. In addition to her husband, she is survived by two children, Laura Mosier and her husband, George McMurtry, of State College and Greg Hargrove and his wife, Becky, of Bellefonte; four grandchildren, Emma and Sarah Mosier and Elizabeth and Ben Hargrove; two step-grandchildren, Barrett and Ann McMurtry; three siblings, Vera Link of Hickory, NC, Wayne Marty and his wife, June, of LeMars, IA, Carroll "Butch" Marty and his wife, Fidella, of Ames, IA, and a sister-in-law, Emogene Marty of Cedar Falls, IA. Marie was preceded in death by her parents, brother Howard Marty, a brother-in-law Edgar Link, and son-in-law David Mosier. She started school at Vernon Consolodated School and graduated from LuVerne High School in Iowa in 1961. After graduation she went to work at Singer in Iowa City for 2 years during which time she met her husband. In 1965 they moved to North Carolina for George to pursue his doctorate. During their time in North Carolina their daughter Laura was born. In 1970, Marie and family moved to State College where George started his career teaching at Penn State University. Shortly after moving to State College, their son Greg was born. Marie was primarily a stay at home mom until her children were teenagers. At that time she began working for Lush Brothers as a custom seamstress and drapery installer. Marie was a member of and volunteer at the Park Forest Village United Methodist Church and served as a volunteer for the Center for the Performing Arts at Penn State. She enjoyed her family and travelling with her husband. Her lifelong passion was sewing. A memorial service will be held at 11AM on Saturday, December 29 at Park Forest Village United Methodist Church, 1833 Park Forest Ave, State College, PA 16803. Burial will be held at a later date. In lieu of flowers, memorial contributions can be made to the Park Forest Village United Methodist Church in Marie's honor. Arrangements are under the care of Koch Funeral Home, State College. Online condolences and signing of the guest book may be entered at www.kochfuneralhome.com.
To send flowers to the family of Marie Hargrove, please visit Tribute Store
Saturday
29
December

Share Your Memory of
Marie
Upload Your Memory View All Memories
Be the first to upload a memory!
Share A Memory
Send Flowers