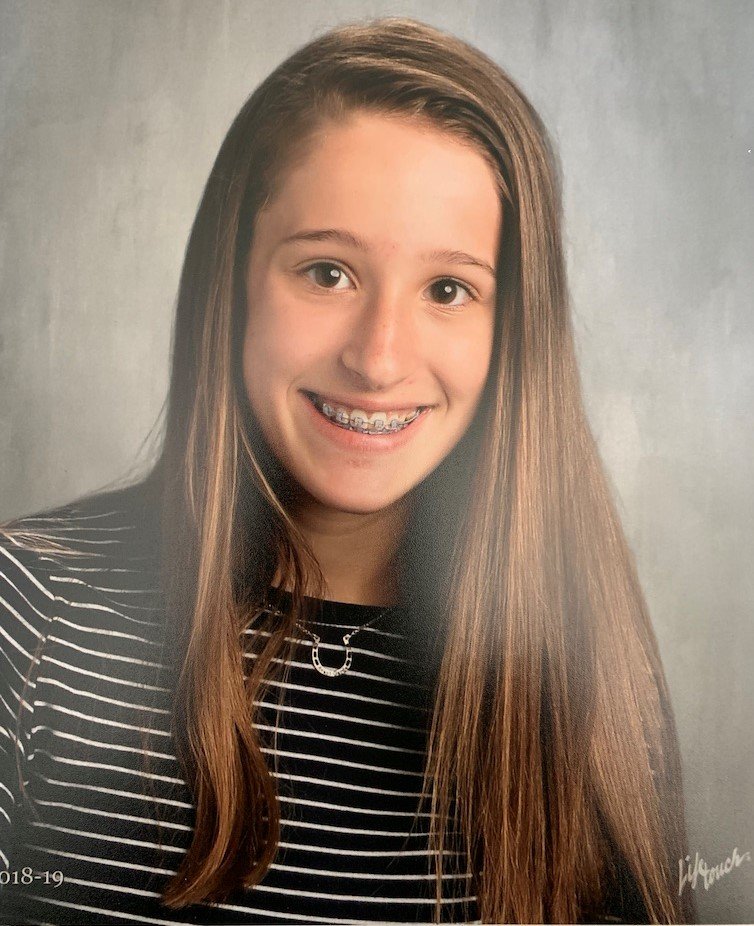 Born January 15, 2006, in State College, she was the daughter of Craig and Susan D. Moscone Stout of Port Matilda.

In addition to her parents, she is survived by brother, Alex C. Stout of Port Matilda, her paternal grandparents, Cyrus (deceased) & Kathleen Stout, of Scranton, Pa; maternal grandparents, Ken & Kitty Moscone, of Sarasota, Fl. In addition, Ashley has a paternal sibling, Ty Cerino of Wilmington, NC, and many aunts & uncles she loved dearly; Jan Moscone, Kim & Jim Kramer, Kelly and Mike Radzicki, Chris and Tammy Stout, Charlie and Sarah Stout, Karen and Joe Beveridge, Brian and Kathy Noviskis, Kenny and Sheila Moscone, and too many cousins to list.

Ashley was an eighth-grade student at Park Forest Middle School and was an avid equestrian. She had been actively competing since she was 6 years old.  In 2017 at 11 years old, Ashley won the Junior Beginner Novice 14U Eventing National Championship held in Tryon, N.C.  She has been competing in USEA horse trials for three years and began riding her horse, Avant Garde “Grady”, in the spring of 2018 with great success. In June, they won the Junior/Young Rider Open Training division at the NJ Region’s H.T. and finished second in the Prelim/Training division at the Bucks County Horse Park H.T.  She is currently ranked as the #2 Junior Rider nationally and was determined to reach #1 by the end of the summer.

The USEA Area II Young Rider program is promoting the use of the hashtag #ride4Ashley in her memory.

Memorial contributions may be made to the Area II Young Riders Program by visiting www.usea2.net/departments/young-riders.

Arrangements are under the care of Koch Funeral Home, State College. Online condolences and signing of the guest book may be entered at www.kochfuneralhome.com  or visit us on Facebook.

To send flowers to the family or plant a tree in memory of Ashley Stout, please visit Tribute Store
Monday
15
July

Share Your Memory of
Ashley
Upload Your Memory View All Memories
Be the first to upload a memory!
Share A Memory
Send Flowers
Plant a Tree