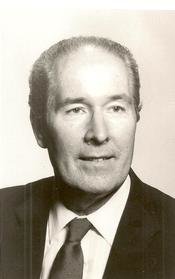 GENE M. HAGENBERGER Gene M. Hagenberger, 84, of State College, formerly of Lewistown, PA and Harrisburg, PA died at home on October 14, 2011. He was born November 10, 1926 in Harrisburg, a son of the late Frank M. Hagenberger and Sarah F. Coldsmith Hagenberger, and grew up in Harrisburg. On January 16, 1954, he married E. Joan Rhinier of Lancaster, PA who survives at home. He was a 1944 graduate of William Penn High School, attended Dickinson College, and served in the organized U.S. Marine Corps Reserve. From 1953 to 1985 he was employed by Standard Steel in Burnham, PA. In 1960 he was named Manager of Melting. He was instrumental in converting steel making from Open Hearth to Electric Furnace melting. He pioneered Acid Electric Furnace melting and the production of long cylindrical bottom poured ingots in the United States. He was a leader in modernizing melting at Standard Steel by implementing Vacuum Degassing, Argon/Oxygen Decarburization and Vacuum Arc Remelting. He authored several Technical Papers dealing with Melting and Processing steel and metal. In his later years he sold Real Estate, and was an Associate Broker at Century 21 Corman Associates, retiring in 1996. He was a life member of the American Institute of Mining and Metallurgical Engineers, Past President of the Electric Metal Makers Guild, and Past Chairman of the American Iron and Steel Institute. He was a member of St. Paul's United Methodist Church and Lewistown Lodge #203, Free and Accepted Masons, Harrisburg Consistory and Jaffa Shrine. He was Past President of the Reedsville Lions Club and Past Chairman of the Mifflin County Cancer Society. In addition to his wife he is survived by three children, Rev. Gene, Jr. and wife, Jan Y. of Hanover, PA, Robert D. and wife Brenda S. of Lewistown, and Dr. Jill M. of Jacksonville, FL; three brothers, Frank L. and Samuel J. of Steelton, PA and Rev. Paul R. of Leola, PA, a sister, Gloria A. Herr of Levittown, PA; and two grandchildren, Elise K. of Fairfax, VA and Grant M. of Harrisburg, PA. He was preceded in death by a sister, Marian L. Keller of Harrisburg. A Memorial Service officiated by the Rev. L. David Witkovsky, Juniata College Chaplain, will be held at Koch Funeral Home, 2401 S. Atherton St., State College, PA on Saturday, October 22, 2011 at 11:00 a.m. Interment will be held at the convenience of the family at a later date. Memorial contributions may be made to Centre Crossings Hospice, Suite 6, 2437 Commercial Blvd., State College, PA, 16801. Online condolences may be made at www.kochfuneralhome.com.
To send flowers to the family or plant a tree in memory of Gene Hagenberger, please visit Tribute Store

A Memorial Tree was planted for Gene
We are deeply sorry for your loss ~ the staff at Koch Funeral Home
Join in honoring their life - plant a memorial tree
Services for Gene Hagenberger
There are no events scheduled. You can still show your support by sending flowers directly to the family, or planting a memorial tree in memory of Gene Hagenberger.
Visit the Tribute Store
Print
Share A Memory
Send Flowers
Plant a Tree