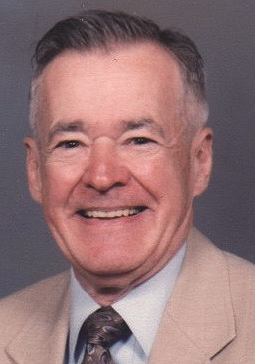 Stewart C. Harlow of State College, PA, died August 19, 2019, after a brief illness. Born August 18, 1927, in Newport, NH, he was the son of Harry and Olive Harlow, and the nephew of Polly Hartfiel, who helped raise Stew after his mother died when he was five. He is survived by his wife of 68 years, Nancy, and his five children: Stewart "Chip" (Barbara) Harlow Jr., Deborah (Delbert) Oakes, Judith (Robert) Caulk, Jeffrey (Linda) Harlow, and Bradford (Barbara) Harlow. His oft-repeated advice to his children was "go forth and outnumber the idiots," so Stew is also survived by 24 grandchildren and 26 great-grandchildren. In addition, he is survived by one sister, Elizabeth Wells, and four half-brothers and half-sisters: Susan Durfey, Cynthia Fulton, David Harlow, and Paul Harlow.

Stew graduated in 1945 from Towle High School, followed by service as an aviation electronics technician in the U.S. Navy until 1949. He then attended the University of New Hampshire, where he met Nancy Jane Vogel of Berlin, NH, whom he later married on June 28, 1951. Stew graduated from UNH in 1953 with a degree in Electrical Engineering.

He began his career in Pittsburgh, PA, with Westinghouse Electric as a sales engineer in 1953, and after a 33-year career (mostly in Beaver, PA) in various marketing and customer service positions, Stew retired in 1986 as Engineering Service Manager. With an early interest in computers, Stew was recognized for implementing a number of customer service computer applications.

As a labor of love, Stew built a lakeside cottage in Weare, NH, where family and friends gathered for wonderful vacations over the course of many decades. He was also an avid woodworker, designing and creating beautiful pieces of furniture that family members will treasure for years to come.

Another passion of Stew's was genealogy, and through his research he discovered eight ancestors whose names appear on the Mayflower manifest. He was amused to also find that he and Nancy were ninth cousins once removed, a matter of dubious distinction.

While in Beaver, he was a member of Four Mile United Presbyterian Church for 40 years, during which time he served several years on the board of trustees and many more as a choir member. After retirement, he and Nancy were active members of the Beaver County affiliate of Habitat for Humanity, serving on its original steering committee and first board of directors.

All five of Stew's children graduated from Penn State, creating a lasting bond with the Nittany Lions that led Stew and Nancy to become residents of The Village at Penn State when it opened in 2003.

In lieu of flowers, donations can be made to Habitat for Humanity of Beaver County at 47 Bridge Street, Beaver Falls, PA, 15010, or online at www.beavercountyhabitat.org

Friends may add thoughts and well wishes at www.kochfuneralhome.com

Share Your Memory of
Stewart
Upload Your Memory View All Memories
Be the first to upload a memory!
Share A Memory
Send Flowers