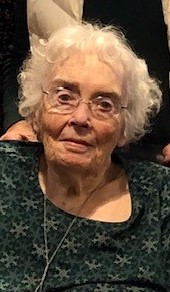 Lois Mitchell Smith, 101, of Raleigh, NC, formerly of State College, PA, died October 12, 2019, in Raleigh after a period of declining health. She was the daughter of Grover Mitchell and Pearl Albertson Mitchell and was born in Ruston, LA, on December 22, 1917. She married Henry Bassett Smith on June 14, 1942, in Pennington, NJ, who preceded her in death in 1981. Her brother Ivan Mitchell preceded her in death as did her parents. She was a graduate of Grove City HS, Grove City, PA, Grove City College, and Moore College of Art, Philadelphia, PA. She was a trained artist. She was a homemaker for most of her life, but also worked in the telephone office of Pennsylvania State University from which she retired in 1987. She volunteered at Schlow Memorial Library, State College, PA, for many years and was a member and docent of Centre County Historical Society. She is survived by two children, four grandchildren and five great grandchildren. A graveside service will be held at Centre County Memorial Park on Tuesday, October 22, 2019 at 1 p.m., with the Reverend Dr. Paul C. Amara officiating. Arrangements are under the care of Koch Funeral Home, State College, PA. Memorial contributions may be made to the Centre County Historical Society. Arrangements are under the care of Koch Funeral Home, State College. Online condolences and signing of the guest book may be entered at www.kochfuneralhome.com.
Tuesday
22
October

Share Your Memory of
Lois
Upload Your Memory View All Memories
Be the first to upload a memory!
Share A Memory
Send Flowers