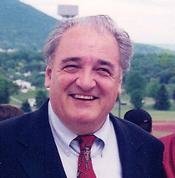 Jan. 26, 1939 - Oct. 24, 2011 Wilhelm Johann Kogelmann III, 72, of Boalsburg, Pennsylvania passed away in his home at the base of Nittany Mountain on October 24, 2011. Son of Wilhelm and Maria Kogelmann, Willy was born and raised in the town of Fürstenfeld in the Steiermark region of Austria. Willy attended the University of Leoben where he earned a degree in Mining Engineering. In 1963 he came to the Penn State College of Mineral Industries where he earned a Master of Science degree in Mineral Processing. He went on to found the Alpine Equipment Corporation in 1968 and he remained active in the business until just a few weeks before his death. His oldest son continues to operate the business. Willy was an inventive engineer who has multiple patents and publications in the tunneling and mining field. He traveled worldwide, was a student of history and had a voracious appetite for books. Although a resident of central Pennsylvania for over 40-years, Willy's strong Austrian accent and grit never faded; much to the enjoyment of his friends and family. He celebrated his proud Austrian heritage and maintained traditions such as his well known Osterfeuer (Easter Bonfire). For sport, Willy loved hunting and never missed a year of skiing. He is survived by his four children; sons Wilhelm and Mark and daughters Karin Brown and Heather Fernsler. In addition he leaves behind six grandchildren and in Austria his sister Lisl Maravic and niece Renate Barker. He will be dearly missed by many and was so grateful for the support he received from friends and family through the past several weeks. Friends will be received at the Koch Funeral Home, 2401 South Atherton Street, State College, PA on Wednesday, October 26, 2011 from 5 until 7 p.m. A Funeral Mass will be held at Our Lady of Victory Catholic Church on Thursday, October 27, 2011 at 10:30 a.m. with Monsignor David Lockard officiating. In lieu of flowers, please consider donations to causes Willy supported: The Mount Nittany Conservancy and the SPCA of Central PA.
To send flowers to the family or plant a tree in memory of Wilhelm Kogelmann III, please visit Tribute Store

A Memorial Tree was planted for Wilhelm
We are deeply sorry for your loss ~ the staff at Koch Funeral Home
Join in honoring their life - plant a memorial tree
Services for Wilhelm Kogelmann III
There are no events scheduled. You can still show your support by sending flowers directly to the family, or planting a memorial tree in memory of Wilhelm Kogelmann III.
Visit the Tribute Store
Print
Share A Memory
Send Flowers
Plant a Tree