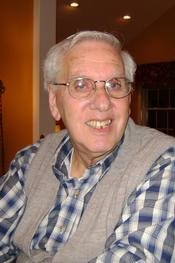 Mario J. Mannella, 86, of State College, PA and formerly of Utica, NY died Sunday, October 30, 2011 at home. Born March 8, 1925 in Utica, New York, he was the son of the late Ralph and Vincenza (Gottuso) Mannnella. On May 24, 1958 he married the love of his life, Albertina Sauer, who died April 15, 1969. Mario was a member of St. Mary of Mount Carmel Catholic Church and a Life Member of American Legion Fort Schulyer Post #1290, both of Utica. During WWII, he served in Patton's Third Army and upon his return began a lifelong career as a commercial printer. Mario was very passionate about his work and eventually built his own business, Dodge Graphic Press which he operated until January 2007. He is survived by a daughter, Cynthia MannellaNickell, her husband Kenneth Nickell and their children Colin, Tanner and Camden Nickell of State College; a son Mark Mannella and his children Vannessa, Mellissa and Mario of Utica; a sister Rose Mosakowski and her husband, Theodore of Baldwin Park, CA; a sister-in-law, Constance Mannella of Clinton, NY; and two brothers-in-law, Leo Mitsler of Baldwin Park, CA and Robert Sauer and his wife Mary of Camden, NY. Mario was devoted to his family. He was a beloved father, grandfather, and uncle. "Poppy" will be greatly missed by his family and friends. In addition to his wife and parents, he was predeceased by two sisters, Ann Torchia and Grace Mitsler, a brother, Peter Mannella, and a brother-in-law, Joseph Torchia Funeral services will be Thursday, November 3, 2011 at 11:00am at St Mary of Mount Carmel Catholic Church. Friends will be received following Mass. Private burial will be in Calvary Catholic Cemetery. The family would like to thank the staff of Elmcroft Assisted Living Facility for the care and kindness they extended to Mario while he resided in State College and to Grane Hospice for the compassionate care they gave to Mario and family especially in his final days. Memorial contributions may be made to St. Mary of Mount Carmel / Blessed Sacrament Memorial Fund, 648 Jay St., Utica, NY 13501 or to The Neighorhood Center, 293 Genesee Street, Utica, NY 13501. Arrangements are under the care of Koch Funeral Home, State College, PA. Online condolences may be made at www.kochfuneralhome.com.
To send flowers to the family or plant a tree in memory of Mario Mannella, please visit Tribute Store

A Memorial Tree was planted for Mario
We are deeply sorry for your loss ~ the staff at Koch Funeral Home
Join in honoring their life - plant a memorial tree
Services for Mario Mannella
There are no events scheduled. You can still show your support by sending flowers directly to the family, or planting a memorial tree in memory of Mario Mannella.
Visit the Tribute Store
Print
Share A Memory
Send Flowers
Plant a Tree