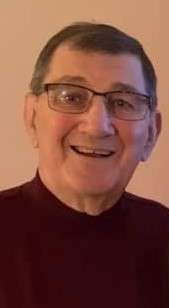 Anthony John (Tony, "Butch") Gebicki, 77, of State College, died Wednesday, January 15, 2020, peacefully at home surrounded by loved ones. Born June 24, 1942, in Latrobe, he was the son of the late Anthony F. and Mildred F. (Duda) Gebicki. On November 11, 1967 he married Paula D. Schroeder, who survives. Also surviving are two children, Michael A. Gebicki and his wife, Amanda, of Westport, CT, Diane L. Yingling and her husband, David, of Boalsburg; and three grandchildren, Samantha and Andrew Gebicki and Anne Grace Yingling. He was a 1960 graduate of Latrobe High School, where he starred as a tight end on the football team. This led Tony to be recruited by Joe Paterno (a father figure his entire life) to play football at Penn State. In 1965 Anthony received a Bachelor's degree from PSU in Health and Human Development. Tony worked for Hallmark Cards as a Sales Executive upon graduation from Penn State, retiring in 1992, and then spent 17 years with the State of Pennsylvania's Department of Labor. He was also a Specialist 6th Class in the United States Reserves. Tony's life was filled with the love of his family and sports. He was a season ticket holder to Penn State football (a source of many family trips), Penn State hockey, and Pittsburgh Steelers football. He was also a fan of the Pittsburgh Pirates. Most importantly, he was an avid fan and supporter of his children and grandchildren's athletic and academic pursuits. He was a member of Our Lady of Victory Catholic Church, the Penn State Alumni Association, the Nittany Lion Club, the Penn State Football Letterman's Club, the State College Elks Lodge #1600 and the State College American Legion Post 245. A Memorial Mass will be at 10:30 a.m., on Monday, January 20, 2020 at Our Lady of Victory Catholic Church, 820 Westerly Parkway, State College, with Father Neil Dadey officiating. Burial will be in Centre County Memorial Park. In lieu of flowers, memorial contributions may be made to The American Kidney Fund, by visiting https://www.kidneyfund.org/take-the-pledge/ or to THON, by visiting https://thon.org/ Arrangements are under the care of Koch Funeral Home, State College. Online condolences and signing of the guest book may be entered at www.kochfuneralhome.com.
Monday
20
January

Share Your Memory of
Anthony
Upload Your Memory View All Memories
Be the first to upload a memory!
Share A Memory
Send Flowers