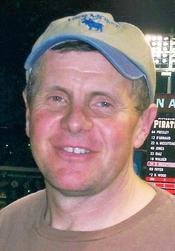 Pierre Henri Robert Lallement, 48, of Boalsburg, died Monday, October 31, 2011 at Mount Nittany Medical Center. Born July 15, 1963, in Beziers, France, he was the son of the late Gerard and Anne Marie Chaine Lallement. He married Robin Ann Wormuth on April 5, 1986 who survives. He is survived by two children, Paul Gerard Robert Lallement and Luc Craig Robert Lallement, at home. He is also survived by one sister Fran Reinhard, of York, and two nieces, Christina and Molly Reinhard. Pierre was a 1981 graduate from State College Area High School. He graduated in 1985 from Penn State with a Bachelor's Degree in Math. Then proceeded to go to the University of Maryland and received a Masters Degree in Math graduating in 1987. He attended the University Baptist & Brethren Church and he was an active member of the Tussey Mountain Ski Patrol, Assistant Scoutmaster of Boy Scout Troop 380 in Boalsburg and a Brotherhood member and Nittany Chapter Advisor of the BSA Order of the Arrow, Monaken Lodge 103. He was active in all these organizations as both a leader and educator. He was also a soccer coach for both of his sons for Centre Soccer and became a certified soccer referee with PA West. He was a certified PADI diver and recently enjoyed a dive in Key Largo, Florida with a High Adventure Boy Scout Crew from Boy Scout Troop 380. Pierre loved life and enjoyed every minute he could. His "joie de vivre" was contagious. His week and weekends were filled with family, fun and work. He enjoyed the outdoors, especially skiing, hiking, biking, sailing and walking the neighborhood nature trail with the family's pet dog Oscar. He was a sports fan. He enjoyed rooting for the Steelers and the Bucs and loved to go to football and baseball games. He was a man for all seasons. He loved a great meal, both eating and preparing, teaching both adults and youth, and playing music. He and his family rarely took a vacation but rather an adventure. Perhaps what gave Pierre the greatest pleasure in life was his family. He and Robin, enjoyed their life together. Their sons, Paul and Luc gave them their greatest joy. Pierre was very enthusiastic about returning to State College 11 years ago. Pierre had the opportunity to continue his career as a sonar software engineer, an area which he had worked in while they lived in Maryland for 14 years. He wanted their sons to have the same educational experience he had growing up here and live closer to their families. Pierre was an employee of the Applied Research Laboratory at Penn State University since 2000, and served as the Head of the Systems Analysis and Simulation Technology Department. He was well known in the modeling community as an expert in high-fidelity acoustic modeling, undersea systems, and U.S. Navy fleet training activities. Pierre was unswervingly dedicated to the employees in his unit, mentored them, and tirelessly championed for their interests. He led multiple technical projects, and was a well respected collaborator within ARL and among his projects' sponsors. Pierre spearheaded efforts to innovate solutions and applications for the Department's products and services; his creativity, initiative, wit, and devotion to his work and to the Laboratory were his hallmarks. His rapport with his colleagues was characterized by a refreshing balance of humor, candor, and professionalism. Pierre recently initiated team building and cross training activities to benefit the unit's employees; he had a vision for the future, and planned for its success. His contributions to the Laboratory's mission were numerous, and he will be sorely missed by his colleagues and friends. He will be greatly missed by his family and friends. In lieu of flowers, his family asks that you consider contributions in his name, to the Juniata Valley Council BSA, the local American Cancer Society and PAWS. Visitation will be from 2-4 and 6-8 p.m. on Thursday, November 3, 2011 at Koch Funeral Home, 2401 S. Atherton St., State College. A Memorial Service will be held at 11:00 a.m. on Friday, November 4, 2011 in Boalsburg at the Tussey Mountain Ski Lodge with the Rev. Bonnie Kline Smeltzer officiating. Burial will be in Boalsburg Cemetery. Online condolences may be made at www.kochfuneralhome.com.
To send flowers to the family or plant a tree in memory of Pierre Lallement, please visit Tribute Store

A Memorial Tree was planted for Pierre
We are deeply sorry for your loss ~ the staff at Koch Funeral Home
Join in honoring their life - plant a memorial tree
Services for Pierre Lallement
There are no events scheduled. You can still show your support by sending flowers directly to the family, or planting a memorial tree in memory of Pierre Lallement.
Visit the Tribute Store
Print
Share A Memory
Send Flowers
Plant a Tree