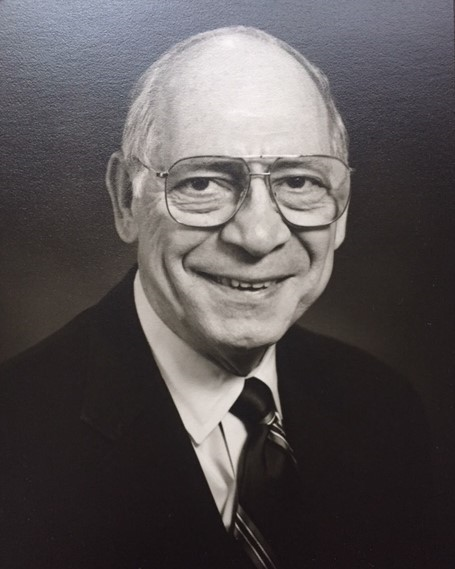 Gerald Bernard Maxwell Stein died on January 23 at age 98 in Portland, Oregon where he had resided at the Robison Jewish Home since 2008. Jerry Stein lived in State College, Pennsylvania for over fifty years where he was well known for his generosity, ability to connect with people from every background, and commitment to his community and profession. Even in declining health at the Robison Home he was appreciated for his warm smile, politeness, and ability to dance. Jerry was the son of Max and Zelma Stein. He grew up in Scranton, Pennsylvania and went to Penn State where he was named one of the top twenty outstanding students in 1943. He graduated from Penn State in 1943 with a degree in psychology. He joined the Army in WWII and served in the signal company with the 94th Army Division serving in France, where he participated in the Battle of the Bulge, in Germany and in Czechoslovakia. His compassion and caring is illustrated by a story he related to Doug Larson, a family friend. Jerry was positioned near the frontlines of the Germans in the winter of 1944. Although he was Jewish, on Christmas Eve he secretly prepared a Christmas tree, decorated it, and then surprised his other three radiomen with gifts of candy and cookies that his parents had sent him. Jerry graduated from the Pennsylvania College of Optometry in Philadelphia in 1949 where he was a member of the Honor Society. He practiced optometry in State College and in Millheim starting in 1949 until he retired in 1994. He lectured extensively and was a consulting editor for Optometric Management magazine. He served in many leadership roles for the Pennsylvania Optometric Society and the American Optometric Association and was president of the Mid-Counties Optometric Society. He was recognized as Optometrist of the Year by the Society in 1975. Jerry was recognized as a generous, enthusiastic and active member of the State College community. He volunteered on many boards in the community including Friends of Palmer Museum of Art, Girl Scout Council, and Centre Home Care. In 2001 he was given the Penn State Center for Performing Arts' Distinguished Service Award. In 2000 he received the borough of State College's XYZ Volunteer of the Year Award. He served as president of the B'nai B'rith and on the Jewish Community Council. He met his wife Sylvia at Penn State. They were married in 1943. Sylvia was a microbiologist at Penn State and directed the NASA Space College for many years. They enjoyed travelling together in all parts of the world as well as camping in national parks. Sylvia passed away in 1993. Jerry will be missed by his family and many friends. He was a loving and supportive husband and father and successfully modeled for his children and grandchildren loyalty, kindness, and generosity. Jerry is survived by his daughter Beverly (Cape Meares, Oregon), his son Steven (Chicago, Illinois), and grandchildren Scott (Washington, DC), Leslie (Brooklyn, NY), and Seth (New York, NY). A memorial service will be held January 31, 2020, 10 am at the Brit Shalom Synagogue, 620 E. Hamilton St. Donations to honor Jerry can be made to the Gerald B. M. Stein and Sylvia Stein funds at the Center for Performing Arts or the Centre Foundation. Arrangements are under the care of Koch Funeral Home, State College. Online condolences and signing of the guest book may be entered at www.kochfuneralhome.com
To send flowers to the family or plant a tree in memory of Dr. Gerald Stein, please visit Tribute Store
Friday
31
January

Share Your Memory of
Dr. Gerald
Upload Your Memory View All Memories
Be the first to upload a memory!
Share A Memory
Send Flowers