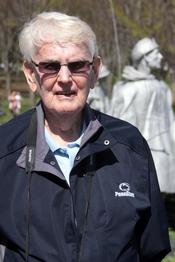 Richard L. Albright passed away on November 5, 2011 at 1:55 AM with his family around him. He was born on November 1, 1929 in Hublersburg, PA, the son of the late Edna (Bartley) Albright and Samuel H. Albright. In January 1953, he married Patricia D. Albright, who survives in Boalsburg. After graduating from State College High School, he worked for Pasture Research Lab on the Penn State Campus until he was inducted into the service in 1951. He served in the Korean Conflict as a radioman with the Second Infantry Division. He also served with a training company as a 1st Sergeant at Indiantown Gap and was honorably discharged with the rank of technical sergeant in 1952. In 1953 he enrolled at Oklahoma State University, Okmulgee Branch, Okmulgee, Oklahoma, and graduated in 1955 with a degree in electronics. Upon returning to State College, he began working in 1955 for Community Engineering, the first television cable company serving the State College/Bellefonte area. In 1956, he started with The Pennsylvania State University working in the computer lab in the Electrical Engineering Department. He moved on to HRB (now Raytheon) in 1960 starting as an Electronics Specialist. He advanced to the position of Program Manager, the position he held until his retirement. During his years at HRB, Richard worked on many programs deemed critical to the national interest. He developed a close working relationship with his customer and was requested to travel to a lot of overseas facilities. He enjoyed the work and traveling during his years at HRB until retiring in 1992 after 32 years. He was a member of St John's United Church of Christ serving on the council as a member and president. He also served as a church trustee and worked on the property committee as well as other church committees. He coached the Boalsburg Little League team from 1955 until 1964. Later, he coached his daughter Bobbi Jo's Boalsburg girls' softball team. After retirement, he enjoyed six cross country trips visiting natural parks and scenic areas, as well as his sister and granddaughter in Arizona. He also enjoyed spending parts of the winter in Florida playing golf, walking and eating seafood. At home, he spent summers golfing, tending his flower and vegetable gardens, and maintaining his lawn and fruit trees. Richard is remembered by his family and friends for his dedicated service to his country during his time in the military and during his many years developing systems while at HRB. His daughters remember Richard as being a loving father and outstanding provider. In addition to his wife, he is survived by two daughters, Deborah Gebhart and her husband, Wayne of Jersey Shore; and Bobbi Jo Shannon and her husband, David of State College; three grandchildren, Jennifer Gebhart Lienard and her husband, Chris of El Mirage, AZ, J. Eric Gebhart of New Port News, VA, and Christopher Shannon of Carrollton, GA. Richard was predeceased by a sister, Lois Orndorf Rork of Globe, AZ. The viewing will be held Wednesday, November 9, 2011 a Koch Funeral Home in State College from 6:00 to 7:30. A celebration of life will be held at St. John's United Church of Christ in Boalsburg on Thursday, November 10, 2011 at 10:30 AM. Interment will be in the Boalsburg Cemetery. In lieu of flowers, memorial contributions may be given to St. John's United Church of Christ, Church Street in Boalsburg, Home Nursing Agency Hospice, 450 Windmere Drive, Suite 100, State College, PA 16801, or cancer research through the American Cancer Society. Online condolences can be made at www.kochfuneralhome.com
To send flowers to the family or plant a tree in memory of Richard Albright, please visit Tribute Store

A Memorial Tree was planted for Richard
We are deeply sorry for your loss ~ the staff at Koch Funeral Home
Join in honoring their life - plant a memorial tree
Services for Richard Albright
There are no events scheduled. You can still show your support by sending flowers directly to the family, or planting a memorial tree in memory of Richard Albright.
Visit the Tribute Store
Print
Share A Memory
Send Flowers
Plant a Tree