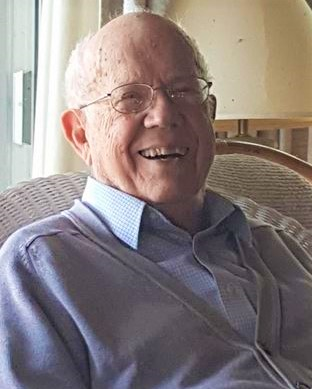 Roger B. Sovocool of State College, PA and originally of Ithaca, NY, passed away peacefully on March 16, 2020 among family and loving staff at The Village at Penn State. Roger lived a long and very full life, marked by optimism, enthusiasm, hard work, and generosity. Born December 12, 1925 in Ithaca, NY to Benjamin F. Sovocool and Gertrude Rust Sovocool, he is survived by his three children Jill L. Findeis (Peter) of State College, Peter F. Sovocool (Melissa) of Orinda, CA, and Daniel R. Sovocool (Tori) of Orinda, CA, as well as grandchildren Jennifer Findeis-Hosey (Daniel), Sarah Findeis, Ben Sovocool, Natalie Sovocool, Noah Sovocool and Paige Sovocool, and great grandchildren Emily and William. He was preceded in death by both of his parents, his younger sister Ruth C. Kleinman, his loving wife of 55 years Doris Morgan Sovocool and their son Mark M. Sovocool. Roger and Doris were married on December 9, 1950 at Sage Chapel on the Cornell campus. After Doris passed away, Roger married Jean Wade Sovocool of The Village, who passed away several years ago. Roger was a native Ithacan, being born and raised in the Fall Creek neighborhood which he considered his childhood home. He graduated from Ithaca High School in 1943, earned an A.B. in Arts & Sciences (government) from Cornell University in 1947, and a J.D. from Cornell Law School in 1949. Roger was involved in Boy Scouts and, as an undergraduate student, he was active on the staff of the Cornell Daily Sun. After graduating from law school, Roger joined his father in law practice in Ithaca. Roger served as City Attorney for Ithaca and was elected to the office of District Attorney of Tompkins County. He served several terms as DA, after which he returned to private practice with lawyers George Pfann, Matthew McHugh and David Tyler in Ithaca. He enjoyed serving as Attorney for the Village of Cayuga Heights for many years. Roger was a long-time active member of Kiwanis and, for several years, taught Business Law at Cornell. Roger loved his family, and made them his priority above all else. He made it possible for them to spend many summers at family gatherings at Lake Ridge on Cayuga Lake and at Devil Lake near Westport, Ontario Canada. He loved the outdoors, finding bullfrogs and turtles for youngsters to see, leading boating adventures for friends and family on Devil Lake, and hiking through the woods and along the shores of Cayuga Lake. One of Roger's favorite outdoor activities was improving the camps for generations to come, while avoiding hornets and other wasps which tended to find him. In the winter months, Roger was an avid fan of Cornell ice hockey and Penn State wrestling. Roger and Doris were very active in the First Presbyterian Church in Ithaca, and in the Renwick Heights Neighborhood Association. In 2011-13, Roger served as President of the Resident's Council at The Village. Roger B. Sovocool will be buried in Pleasant Grove Cemetery in Ithaca, NY. This summer, his family will hold a celebration of his life on the shores of Cayuga Lake. Roger enjoyed studying the local history of Ithaca, Lansing, and Tompkins County, and the family suggests donations to The History Center in Tompkins County (formerly Dewitt Historical Society) in Ithaca, NY or to Habitat for Humanity, in lieu of flowers. Finally, Roger's family wants to thank his many dear friends at The Village and especially in the Personal Care Unit and Atrium for their wonderful friendship and loving care. Arrangements are under the care of Koch Funeral Home, State College. Online condolences and signing of the guest book may be entered at www.kochfuneralhome.com.
To send flowers to the family or plant a tree in memory of Roger Sovocool, please visit Tribute Store
Services for Roger Sovocool
There are no events scheduled. You can still show your support by sending flowers directly to the family, or planting a memorial tree in memory of Roger Sovocool.
Visit the Tribute Store

Share Your Memory of
Roger
Upload Your Memory View All Memories
Be the first to upload a memory!
Share A Memory
Send Flowers