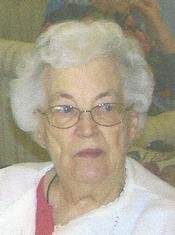 J. Joyce Carlson, 87, of State College, died Tuesday, November 1, 2011, at the Inn at Brookline Village. Born June 2, 1924, in Lansing, Michigan, she was the daughter of the late John Tree and Janet Merna Ferguson Carpenter. She married Axel Robert Carlson on November 11, 1942. She is survived by five children, Kris Porter and her husband, Ken, of Centre Hall, Kathy Richards and her husband, David, of Fleetwood, Karin Garrett and her husband, Ken, of Hillsboro, OR, Eric Carlson and his wife, Mary, of North Pole, AK, and Kurt Carlson and his wife, Karen, of Fairbanks, AK. She is also survived by twelve grandchildren and nine great grandchildren. Joyce was the administrative assistant to the department head of Mining & Mineral Engineering at the University of Alaska. She attended the Berean Baptist Church in State College. Visitation will be from 1:00 to 3:00 p.m. on Sunday, November 6, 2011 at Koch Funeral Home, 2401 S. Atherton St., State College. Funeral services will follow at 3:00 p.m. at the funeral home with the Rev. Gary Finn officiating. Burial will be in Boalsburg Cemetery. In lieu of flowers contributions may be made to Air Calvary c/o Straw Family at P.O. Box 727 Bedford Hills, NY 10507. Online condolences may be made at www.kochfuneralhome.com
To send flowers to the family or plant a tree in memory of J. Carlson, please visit Tribute Store

A Memorial Tree was planted for J.
We are deeply sorry for your loss ~ the staff at Koch Funeral Home
Join in honoring their life - plant a memorial tree
Services for J. Carlson
There are no events scheduled. You can still show your support by sending flowers directly to the family, or planting a memorial tree in memory of J. Carlson.
Visit the Tribute Store
Print
Share A Memory
Send Flowers
Plant a Tree