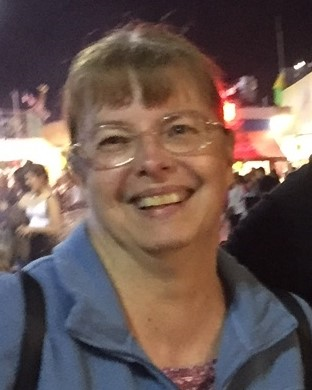 Linda Meeker Young, 63, of PA Furnace, died Thursday, April 9, 2020, at Geisinger Medical Center, Danville. Born August 29, 1956, in Morristown, N.J., she was the daughter of the late Thrygve Richard Meeker and Joan Christine Honce Meeker of Wilmington, DE. On September 24, 1983, in Allentown, she married David Eugene Young, who survives. In addition to her mother and husband, she is survived by two sons, Samuel David Young of PA Furnace and Benjamin Earl Young and his wife, Audrey Morales Young, of Arlington, TX and two siblings, Diane Bartels of Wilmington, DE and Thrygve K. Meeker of Macungie. In addition to her father, she was preceded in death by beloved grandparents, aunts, uncles, cousins, and her cat, Marshmallow. She was a 1974 graduate of Salisbury High School, near Allentown. She was also a 1978 graduate of Mary Washington University in Fredericksburg, VA, earning a Bachelor of Arts degree in Foreign Languages. In her youth, Linda was a dedicated majorette, eventually attaining the rank of Captain. Her Salisbury High School yearbook picture is captioned with: "......more trophies you can count......". She continued this interest by training young relatives and neighbors. While working at the LARAC thrift shop in Allentown, Linda honed her sales and collecting skills. She first arrived in State College to manage Foxmoor, a woman's clothing store at the Nittany Mall. She later obtained a real estate license, working at Towne Reality and later Heritage Reality. After a brief stint as a Dental Assistant, she settled into raising her two boys, Sam and Ben. Linda's interests were diverse, including sewing, crafting, cooking, and years as a dedicated Eagle Scout and soccer Mom. Always a cat fan, she would dote over her feline friend, Marshmallow. Once when Marshmallow jumped upon a freshly painted window sill, Linda's mother placed the cat on a piece a paper and sent the paw prints to Linda at college. As an avid seamstress and crafter, she was always making something out of seemingly nothing. "Recycle and Reuse" was one of her mantras. For example, having heard of need for PPE from a friend working in a New York City Hospital, Linda had just produced a prototype COVID mask using flannel and a coffee filter. She loved her time at the Jersey shore, and especially playing games on the Boardwalk in Seaside Heights, NJ. She also enjoyed antiquing along with her husband. Her collections include crested milk glass, costume jewelry, novels and picture books. Linda was a member of the Pine Grove Presbyterian Church, and until recently both a Deacon and Treasurer of the PGPC Women Group. She was also a member of Crafts and Conversations in State College, a support group for families where English is not a first language. But, Linda was most known for her smile, thoughtfulness, and a light and happy disposition. She was seldom judgmental and always a great listener. She will be sorely missed! A memorial service will be scheduled at a future date. Memorial contributions may be made to the Pine Grove Presbyterian Church, 150 W. Pine Grove Rd., Pine Grove Mills, PA 16868 or any charity of your choice. Arrangements are under the care of Koch Funeral Home, State College. Online condolences and signing of the guest book may be entered at www.kochfuneralhome.com or visit us on Facebook.
To send flowers to the family or plant a tree in memory of Linda Young, please visit Tribute Store

A Memorial Tree was planted for Linda
We are deeply sorry for your loss ~ the staff at Koch Funeral Home
Join in honoring their life - plant a memorial tree
Services for Linda Young
There are no events scheduled. You can still show your support by sending flowers directly to the family, or planting a memorial tree in memory of Linda Young.
Visit the Tribute Store

Share Your Memory of
Linda
Upload Your Memory View All Memories
Be the first to upload a memory!
Share A Memory
Send Flowers
Plant a Tree