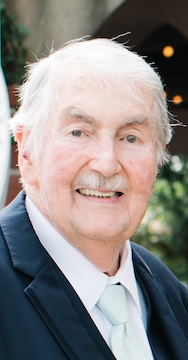 Gilbert Howard Thompson, 91, formerly of State College, went to be with the Lord on Thursday, April 30, 2020, at Valley View Haven Retirement Home in Belleville. Born August 20, 1928, in Philadelphia, Gilbert ("Gil") was the son of the late Gilbert Howard Thompson and May Speakman Thompson. He was one of four children—three brothers and one sister. Gil graduated from Northeast High School in Philadelphia in 1946. After graduation, he joined the U.S. Navy and was on active duty in the aftermath of World War II. Gil went on to study broadcasting and communications at Temple University. He received his bachelor's degree in 1952 and his master's in 1955. In between degrees, he became a cast member of "Action in the Afternoon," a daily live western television series on CBS that originated from the backlot of WCAU in Philadelphia. He was chosen to play a villain because he had a black mustache in those days. Gil was justly proud of having been part of early television history and was a member of the Broadcast Pioneers of Philadelphia. Gil and his wife, Emalee Ann Earon, who preceded him in death on July 21, 2014, met while performing in musical theater at the Lambertville Music Circus in New Jersey in the summer of 1951. He decided to propose after quickly discovering that Emalee was the love of his life. They married on June 21, 1952, and were featured as a singing duo on Moore McCormick cruise ships visiting South American ports in the 1950s. In 1956, Gil started his first job with CBS as a broadcast advertising account executive and then transitioned to Columbia Records, which was then a division of CBS. He switched to the ABC network and worked there as a regional manager until 1973. While pursuing his career in broadcasting, he developed a second vocation as a teacher. He served as an adjunct professor at Charles Morris Price School of Advertising in Philadelphia and later taught at Suffolk County Community College on Long Island. He and Emalee moved to State College in 1985, and from 1987 to 2002 Gil taught a variety of classes at Penn State while developing and managing a variety of communications-related business ventures. They became great fans of Penn State sports and were often in attendance at Rec Hall or the Bryce Jordan Center or Beaver Stadium. He was a member of Calvary Church of State College and also attended the Valley View Chapel during his time at Valley View Haven Retirement Home. If there was one thing that he wanted people to remember, it was to know Christ and to make Him known. Gil had a passion for volunteering and served as a Mason for State College Lodge No. 700, William L. Elkins Lodge No. 271, the Ancient Accepted Scottish Rite, as well as Kiwanis Clubs in Philadelphia, Chicago, and State College, the CBICC, and the US Navy League. Gil lived life to the fullest. He infused every day with what he called "PMA"– Positive Mental Attitude. He knew how to make people smile and communicated his special energy to everyone he interacted with, whether a barista in a coffee shop or a cashier in a department store. He had a lively sense of humor and even the little things – the love of ice cream and Friday afternoon shuffleboard games – were material for happiness. Gil's creativity and sense of adventure made him a one-of-a-kind dad who gave his daughters a magical childhood. He is survived by daughter Lori Ann Thompson Maxfield and husband Kevin of State College; and son-in-law, Gregory Greene of Blue Point, NY, widower of daughter Lee Ann Thompson Greene, who died in 2002. Gil leaves four grandchildren: Krista Thyberg and husband Andrew of Bayport, NY; Bethany Palmer and husband Matt of Fort Mill, SC; Garner Greene and partner Kathryn Geraghty of Patchogue, NY; and Jenna Maxfield of Washington, DC; three great-grandchildren, Hanna Lee Thyberg, Delilah Ann Greene, and Emma Lee Palmer; and many beloved nieces and nephews. In addition to his parents, his daughter, and wife of 62 years, Gil was preceded in death by his four siblings, Robert, Kathryn DeFay, Karl, and John. Services will be held at a later date at the convenience of the family. Burial will be in Indiantown Gap National Cemetery. Memorial Contributions may be made to the Valley View Haven Retirement Community Endowment Fund, 4702 E. Main St., Belleville, PA 17004 or to the Salvation Army, 2603 E. College Ave., Suite G, State College, PA 16801. Arrangements are under the care of Koch Funeral Home, State College. Online condolences and signing of the guest book may be entered at www.kochfuneralhome.com.
To send flowers to the family or plant a tree in memory of Gilbert Thompson, please visit Tribute Store
Services for Gilbert Thompson
There are no events scheduled. You can still show your support by sending flowers directly to the family, or planting a memorial tree in memory of Gilbert Thompson.
Visit the Tribute Store

Share Your Memory of
Gilbert
Upload Your Memory View All Memories
Be the first to upload a memory!
Share A Memory
Send Flowers