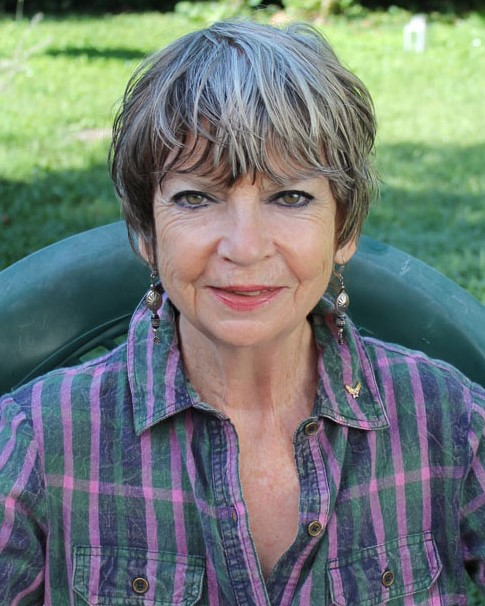 Born in Southeast England in a Cromwell house on January 13, 1946, Barbara Metzner grew up poor in New York City, moving frequently and attending many schools. After high school, she worked as a travel agent in New York City. She married John Metzner in 1968 and lived in New York City, the suburbs of Detroit and in State College, where John was a Professor of Computer Engineering at Penn State. She was a dedicated mother who ensured her children were educated, creative, compassionate and free thinking. Her children: Adam, Mark and Samantha remained close to their mother throughout their lives. At the age of 40, she entered Penn State University as a returning adult student, where she majored in sculpture, graduating with honors while raising three children. Her art work has been widely acclaimed with prizes from the Central Pennsylvania Festival of the Arts and the Art Alliance of Central Pennsylvania. Her passion for abstract art is characterized by inventiveness, a wide pallet of color and the unexpected. At The Art Alliance, she formed enduring friendships with a group of “sister” artists, without whom, she said, she would be lost. She was an expert and creative chef, a devoted gardener, a natural dancer and an inveterate traveler. She has undertaken an archeological dig in Egypt, lived and studied in Greece and has taught art at Jinan University in Shenzhen China. With her life partner, Geoffrey Godbey, she has travelled to many countries, absorbing the culture and making friends. She served as the American mother for a number of Chinese, Taiwanese and Korean students, all of whom became an important part of her life, as she did of theirs. She treated people with dignity and respect, regardless of nationality, role or station in life. For fourteen years she battled cancer with unbelievable will and courage, returning to the garden almost immediately after a mastectomy. Those fourteen years were filled with adventure, personal growth and love for many: her children, son-in-law Spencer, Geoffrey’s children, Cassandra and Tamara, her grandson Noah, and her brothers Colin, Michael and David. Cancer eventually took her life but never her indomitable spirit. She showed all who knew her the potential of the human will. Arrangements are under the care of Koch Funeral Home, State College. Online condolences and signing of the guest book may be entered at www.kochfuneralhome.com Thank you all for the heartfelt condolences and support you have offered to our family during this time of loss. The family is asking for any who wish to give to the family to make a donation to the American Cancer Society "In Memory" of Barbara Metzner in lieu of sending flowers, gifts or cards to the family. On their website you can select to create an eCard with your personal words. Address the eCard to babxine@aol.com so the family will be able receive and read your card. Thank you!

Share Your Memory of
Barbara
Upload Your Memory View All Memories
Be the first to upload a memory!