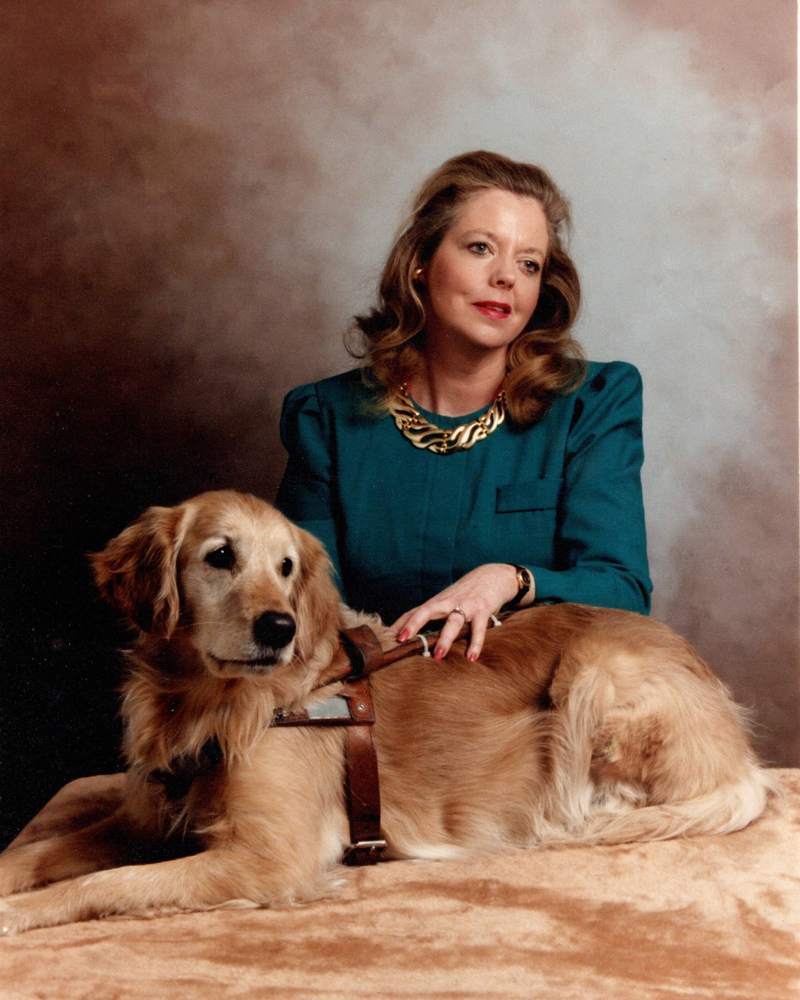 Rana McMurray Arnold passed away peacefully at Mt. Nittany Medical Center during the early morning hours of May 28, 2020, after suffering a stroke. She was 76 years old. A beloved grandmother, mother and friend, she is survived by her sons, Timothy Arnold (Jules) and Christopher Arnold (Malia), her granddaughters Elizabeth Arnold and Vivian Arnold, her guide dog Audrey, and countless friends and relations. She was preceded in death by her parents, Francis "Frank" McMurray and Marion McMurray Raddatz, her beloved husband of 48 years Dr. Steven F. Arnold, her brother Ronald McMurray, her sister Robin McMurray, and four increasingly spoiled guide dogs, Tyler, Millie, Smiddy, and Bingo. Rana was born in 1944 with retinopathy of prematurity, which left her with low vision for her entire life. Nevertheless, Rana graduated from Knox College in Galesburg, IL in 1966 with a degree in English, and married Steve later that same year. As Steve pursued a career in academia, Rana found herself dissatisfied with the services available for people with low vision. In 1982 she co-founded the Sight-Loss Support Group of Central PA ("SLSG"), and served as its executive director until her retirement in 2013. Rana's trademark determination was evident from the first fundraiser for the SLSG. The "Swim for Sight" was a fundraiser where she pledged to swim 10 miles in the Toftrees Country Club pool, the last eight of which were accomplished despite a torn muscle in her calf that left her unable to walk for some time afterward. During Rana's tenure as executive director of the SLSG, the SLSG established many programs to assist people with low vision, including the Art Through Touch and Festival Eyes programs to help people with low vision experience art, View Via Headphones, which provided audio description for movies and theater, and Eye on Youth, a support group for parents of children with low vision. Rana was also an advocate for guide dogs, which had given her a level of independence she previously had thought was unachievable. While director of SLSG, she helped establish a local Puppy Raiser program with the Lions Club, which helps raise puppies for the Seeing Eye, the nation's largest program providing guide dogs for the blind and visually impaired. She also worked with the Seeing Eye to establish a breeding program for golden retrievers to be used as guide dogs. Rana retired from SLSG in 2013 to take care of Steve, who was ailing. When he passed in 2014, she enjoyed her retirement, painting, travelling, spending time with friends, and doting on her granddaughters, who she adored. Bright, indomitable and fiercely independent, Rana will be remembered as somebody who could find the good or funny in any situation. She was a bright light to many, and will be sorely missed. Rana will be laid to rest next to her parents in a private ceremony in La Jolla, California. Due to the pandemic, in-person services for Rana in State College are postponed to a later date. In lieu of flowers, donations can be made to the Sight-Loss Support Group of Central PA, slsg.org, or to the Seeing Eye, seeingeye.org. Funeral arrangements are under the direction of Koch Funeral Home, State College. Online condolences and signing of the guest book may be entered at www.kochfuneralhome.com or visit us on Facebook.

Share Your Memory of
Rana
Upload Your Memory View All Memories
Be the first to upload a memory!