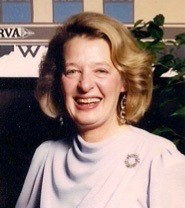 Songs of My Mother

Born Marie Loretta Wrobleski, on December 10, 1928, the youngest of four children of Stella and Victor Wrobleski, grew up in the steel mill town of Braddock, just outside of Pittsburgh. She graduated Penn State in 1950 and received her Master's Degree in 1952. Marie was a member of Alpha Omega Pi sorority while at Penn State. She was an art teacher at State College High School and met the love of her life, Richard C. Fedon, on a blind date. They married Nov. 15, 1952.

I can close my eyes and hear my dad singing Ave Maria at Our Lady of Victory Church. His reverent baritone was not directed toward the Christ child's mother. Instead he was singing of his beloved wife of 56 years.

During the dementia years, the last 15 years of Marie Fedon's life, I have treasured old stories told by others that were lost to her forever. New stories are also precious, and mine to repeat.

As the eldest of five daughters, I was the end of my mother's first career as an art teacher at State College High School.

In recent years, one of her favorite outings was to The Original Waffle Shop on West College Avenue. There, she is affectionately known by the staff as "S-5" (the weekday special of two blueberry pancakes). We'd stand in line ("It always moves quickly, you know") and occasionally see some of her former pupils.

"Oh, I got so mad at your mother. She made us learn to spell her name, Wrobleski, W-R-O-B-L-E-S-K-I, and then what did she do? She got married and changed her name to Fedon, F-E-D-O-N."

There were other tales about how all the high school boys fell in love with the new blonde art teacher … or how a few high school girls followed her after school to see where she was going (Dick Fedon's house on Hillcrest Avenue).

"How do you solve a problem like Maria? How do you catch a cloud and pin it down? …"

While we may have pinned Marie down for a while, by the time the youngest was starting school, Marie, with friends Marilyn Tammen and Sally Timpe, opened The Country Sampler in Boalsburg. The year: 1969. "People need a place to buy wooden spoons," was their early sales pitch.

By this time, Marie, who couldn't boil an egg when she married Dick, had evolved into a gourmet cook. She (and Dick) had supper clubs with friends. They gave dinner parties to benefit the Women's Resource Center. They helped plan galas for the Palmer Art Museum. They worked on committees to establish the State College YMCA. She had countless luncheons to help reinstate her sorority, AOPi, on the Penn State campus. Let's face it—she was Martha Stewart before anyone had heard of Martha Stewart.

A few years ago I met a fellow named Harvey who immediately recognized my mother. "I bought my first Cuisinart from her." And I can't tell you how many people have said they still use this or that recipe that they got from her monthly Country Sampler newsletter, Things Worth Knowing.

Marie taught cooking classes at The Sampler, baked hundreds of Groundhog cookies to give away at the shop every Feb. 2, and promoted the art of Pysanky, Ukrainian egg decorating with beeswax and dyes, for Easter at The Country Sampler. She shopped at gourmet and gift shows in San Francisco, Chicago, Atlanta, and NYC. She was Historic Boalsburg's hostess with the most-est for many years. Since 2011, the former drummer in the Braddock High School marching band has been a regular at Lemont's Concerts on the Village Green and Acoustic Brew events.

Marie was "Nonna" to her dozen grandchildren: Alicia Flanagan and her husband, Timothy Creedon of Belmont, MA, Liam Flanagan of Philadelphia, and Ansley Flanagan of Cambridge, MA; Wille Harner of Washington, D.C., Andre Harner of Portland, OR, Leon and Nick Harner of State College; Lamar and Lake Duffy of Philadelphia, and Lia Duffy of Cambridge, MA; Marina Lynch and her partner Koen Claes of Ghent, Belgium, and Richard Lynch of State College. They took beach vacations in Avalon, NJ, with Kohler's Bakery creamed-filled donuts, and rode the waves and played hide-and-seek in Sandbridge, VA. Cape Cod. Cousin Camp. Her grandchildren watched in awe as she "accidently" slipped her jacket off the back of her chair (repeatedly) at a restaurant so she could flirt with the waiter when he picked it up for her.

Nonna was her grandchildren's back-scratcher extraordinaire. She envied natural curls (she slept in bobby pins), never went anywhere without her smile or her lipstick—Revlon #130, Rose Velvet, and always corrected "yeah" to "yes." One of her grandsons even took Nonna to elementary school for his show-and-tell, and as an adult wrote a guitar instrumental entitled Marie. For the past nine years she had weekly Skype visits with my daughter who lived in Brussels and now Ghent. Each time she'd ask Marina, "So, do you like living in Belgium?"

My son Richard was her caregiver on and off for the last 10 years. Born on his grandfather's 70th birthday, Richard Reilly Lynch was Marie's second true love. He is gentle, playful, and full of the spark that she admired in people. He loved taking Marie for a drive downtown to "see what was going on," breakfasting at The Waffle Shop, or watching old movies and musicals with her. He was the first to start calling her "Marie," not out of disrespect but because the disease erased "Nonna" from her memory. She always knew "Marie."

"Marie, the dawn is breaking, Marie, you'll soon be waking …" Yes, Irving Berlin wrote a song about Marie too.

Marie has five great-grandchildren: Finley, Lais, Elise, Owen and Peadar. May 2019 we had a family reunion/Nonna's 90th birthday celebration. Four of five attended, though two were babes in arms.

Luckily, they all have unusual names. No John among them. My dear friend Jan's husband is named John. The poor man has had to endure too many verses of "John Jacob Jingleheimer Schmidt, his name is my name too …"

With COVID-19, Marie was able to flap her social butterfly wings through Zoom. There were Zoom Master Gardener meetings, Alpha Omicron Pi Sorority Zoom get-togethers, a Zoomed We Are video cheer for the Penn State Women's Swimming Team, and a few Fedon Family Festival Zoom sessions.

As Marie got weaker, we'd use a wheelchair for doctor visits. Her voice would echo as I pushed her down the hallways, "Off we go, into the wild blue yonder, flying high into the sky …" Strangers would stop, turn their heads, and smile at her joyful enthusiasm.

But the song dearest to my heart, especially if Andrea Bocelli is singing it, sums up everything:

"… Say it loud and there is music playing. Say it soft and it's almost like praying…"

Funeral service will be at 11 a.m., on Friday, June 26, 2020, at Our Lady of Victory Catholic Church, 820 Westerly Parkway, State College with Father Jonathon Dickson officiating.

Burial will be private at the convenience of the family.

Share Your Memory of
Marie
Upload Your Memory View All Memories
Be the first to upload a memory!