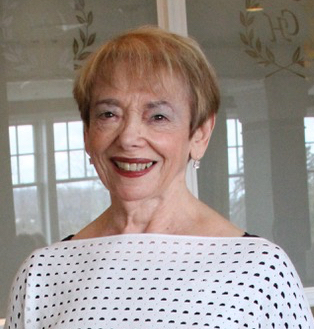 It started with "Hello Senator, I'm Dorothy Rigby with the League of Women Voters, your guide for the next three days."

The junior senator responded, "I'm John Kennedy, pleased to meet you Mrs. Rigby." And so began the senator's visit to Houston, Texas to give his famous "I am not the Catholic candidate for President speech." It also inspired the 27-year-old Dotty 's life of political activism, education, public service, philanthropy and unwavering support for the arts. It didn't stop that day in September 1960. Most importantly, Dotty was unmatched in her commitment as wife to Paul Rigby, mother to Peter and Mark, and staunch friend to innumerable people across the country for decades. Her style, ease of approach, humility, charm and wit never stopped bringing many into her circle of friends and influence.

A good athlete and accomplished tennis player, Dotty enrolled at the University of Alabama, hoping to play at the college level. It didn't happen, but she excelled elsewhere. A student in communications, Dotty joined the debate team, becoming the university's first female captain. Years later, she was inducted into the Southern Debate Hall of Fame. Dotty was also a member of Mortar Board, the first national honor society for college senior women and one of the oldest organizations that recognizes college seniors for their achievements in scholarship, leadership and service.

One of the first women in the U.S. accepted into NYU's law school in 1954, but with little money and law scholarships available only to men, Dotty instead took a graduate assistantship at Alabama to pursue an MA in speech and coach the freshman debate team.

Dotty understood drama and the power of communications. No doubt about that. In the spring during exam week, a grad school friend who was dating a young college professor brought Dotty to a picnic to relax and prepare for a test. She waded into the middle of the shallow stream to a flat rock with her notebook to study. An hour later she started to rejoin the others, but a water moccasin had curled up on a rock blocking her path to shore. Dotty screamed in mortal terror. That professor on a date ran to her aid and carried her to safety; he was Paul Rigby, her new hero and soon to be husband, a marriage that endured for 62 years. The snake turned out to be dead, possibly a stick, Paul noted years later.

Unable to enroll in a non-existent law school at Penn State when Dotty and Paul arrived in 1964, Dotty enrolled in yet another Master of Arts program in political science. This time she graduated with an MA in education, having accumulated more graduate credits than needed from the Universities of Alabama, Houston and Missouri—schools at which Paul taught. By this point Paul and Dotty were also raising two boys, Peter and Mark. After substituting in the State College Junior High School for several years, she took a permanent role in the new Park Forest Junior High. It was the site of the school district's progressive foray into nontraditional methods of instruction that provided individual experiences suited to the needs, abilities and interests of students.

That opened an opportunity for Dotty to develop law and justice education programs, a lifelong interest for her. She believed teaching teenagers about the law, law enforcement, the courts and justice processes was essential to a good civics curriculum. Additionally, this could not only help prevent teens from getting into trouble, but also foster a respect and understanding of our legal systems. Dotty developed class materials and led workshops and seminars for secondary schools and colleges throughout Pennsylvania. Because of her work for the Pennsylvania Department of Education, she was elected President of the State Advisory Committee for Law-Related Education. Dotty also served for two years on the National Science Foundation Panel to review science programs. In 1981 Dotty retired from 17 years in academia.

Free to pursue the other loves in her life, design, the arts and classical music, Dotty began working as office manager for an interior design firm. But perhaps her, and Paul's, most lasting contributions to the Centre Region survive with the Nittany Valley Symphony, the Penn's Woods Music Festival, the Palmer Art Museum, and the performing arts.

Committed to a sustainable arts culture in their community, Dotty and Paul made intentional investments. It was not so much for their love of the arts, but because they understood that if they did not invest, these institutions might not survive. Dotty worked endlessly to uphold the vision to expand orchestral excellence in Centre County and nurture youth music appreciation to develop future audiences. Dotty served as the President of the Board of Directors of the Nittany Valley Symphony and the President of the Nittany Valley Symphony Guild Board of Directors, and many other positions during her lengthy tenure, including chairing the yearly Poinsettia sale and the annual NVS Fashion Show fund raiser - an event she initiated to raise money and to introduce the Symphony to new audiences. She also chaired the Advisory Council for the Penn's Woods Music festival. The visual arts were important too, and Dotty was a long-time Friend of the Palmer Art Museum and served on the museum's Friends Board.

Dotty's and Paul's enthusiasm and drive to put the symphony on a sustainable financial footing never waivered. They endowed the Paul and Dorothy Rigby Fund to support the operations of the Nittany Valley Symphony. Other benefactions include the Dotty and Paul Rigby Classical Music Endowment at the Center for the Performing Arts (Penn State), and the Dotty and Paul Rigby Classical Endowment for the Penn's Woods Music Festival in the School of Music at Penn State. They helped underwrite special performances for the Center for the Performing Arts, which brought Joshua Bell and Itzhak Perlman to State College. In 2013 Penn State named Dotty and Paul Rigby recipients of its 2013 Distinguished Service Award for their service and support of the performing arts. Of Dotty, Russell Bloom of the Penn State Music Department wrote, "A supporter, a counselor, a cheerleader, an intellect, and a dear, dear soul is how I shall remember her. State College is a better place because of Dotty and Paul Rigby."

As dedicated as Dotty was to the arts and civic involvement, her lasting legacy to the community may rest with thousands of her former students. Many wrote to her well into their careers expressing how much they learned about life and themselves from Dotty, many referring to her as "Mom" or "Aunt Dotty." Tributes such as "You were the best teacher of all time," and "You made learning so much fun," are not unusual. Years later, a former student teacher wrote she learned more in a few months working with Dotty than all four years of college: "Never raise your voice," "Don't send your kids to the principal's office," and "You have to establish a reputation."

Without hesitation, Dotty was fiercely devoted to family and friends. A person in need could always count on Dotty's assistance. Her dearest friends were the members of the Newcomers' Bridge Club, a group of 8 professors and spouses who arrived at Penn State in 1964 from across the United States. They met monthly for 50 years to play bridge and socialize, in later years, just to eat dinner. The families of the bridge club became the extended family of aunts, uncles and cousins - friends to this day.

Of her many accomplishments, Dotty was most proud of her two sons, Peter and Mark. Both she and Paul built a home, rich in experiences and unqualified love and support, devoid of criticism and judgment that allowed the boys to thrive and to become the independent thinkers their parents were.

Dorothy Rigby died quietly and at peace in her home at the Village at Penn State with her sons by her side on Wednesday, July 15, 2020 from complications of cancer. She is survived by sons, Peter and Mark. Her husband, Paul, and daughter-in-law, Ellen (Peter), predeceased her.

Memorial gifts to the Nittany Valley Symphony may be made payable to the Centre Foundation and directed to the "Paul and Dorothy Rigby Fund" and mailed to Centre Foundation, 1377 Ridge Master Drive, State College, PA 16803 or payable to "Penn State" and directed to: 1) The Dotty and Paul Rigby Endowment for the Penn's Woods Music Festival in the School of Music; or 2) The Dotty and Paul Rigby Classical Music Endowment at the Center for the Performing Arts and mailed to Penn State, 2583 Gateway Drive, Suite 130, State College, PA 16801.

A memorial service will be planned in the coming months followed by an announcement.

Share Your Memory of
Dorothy "Dotty"
Upload Your Memory View All Memories
Be the first to upload a memory!