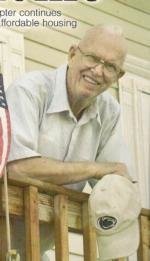 Robert Bradley McKenzie 79 of State College died Sunday, January 2, 2011 at Centre Crest in Bellefonte. He was born July 5, 1931 in Thunderbolt, GA the son of the late Eva McKenzie. He was reared by his grandparents Ida and George McKenzie of Fort Mills, South Carolina where his grandfather was the former mayor. He is survived by his wife the former Fay Williams, his partner for 42 years, who survives of State College. Robert served in the Army during the Korean War. He was a resident manager for a public storage company and volunteered for Habitat for Humanity. A funeral service will be held at the Koch Funeral Home, 2401 S. Atherton Street, State College on Wednesday, January 5, 2011 at 11:00 AM with Rev. Luke Miller officiating. Burial will be in Pine Hall Cemetery. Friends will be received at the Koch Funeral Home on Tuesday, January 4, 2011 from 6 until 8 PM Memorial contributions may be made to: Habitat for Humanity, P.O. Box 313, State College, PA 16804
To send flowers to the family or plant a tree in memory of Robert McKenzie, please visit Tribute Store
Services for Robert McKenzie
There are no events scheduled. You can still show your support by sending flowers directly to the family, or planting a memorial tree in memory of Robert McKenzie.
Visit the Tribute Store
Print
Share A Memory
Send Flowers