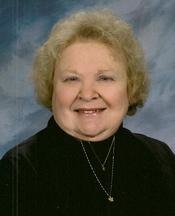 Arlene Lorraine Smith 72 of State College went to be with her Heavenly Father on Saturday, November 19, 2011 she was a patient at Mount Nittany Medical Center in State College. Born June 30, 1939 in Harrisburg she was the daughter of the late Evan Garrett Anderson and Edna Jane Kelley Anderson who survives of State College. She married Samuel Clair Smith who predeceased her on July 31, 1982. She was a 1957 graduate of Bald Eagle High School and was employed at Penn State University by the Department of Labor Studies and Industrial Relations, for 39 years as a student advisor. She loved her students. Arlene was the Mother Advisor for the State College Rainbow Girls, and went through the chairs and was a Past Worthy Matron of the Eastern Star of State College. She was a member of the Cedarettes, and St. Paul's United Methodist Church. She enjoyed the lady's lunch bunch, was a member of Penn State Wrestling Club, and for years loved her Penn State Football . She faithfully followed the Penn State mens and women's basketball and womens volleyball programs, and she loved taking her mother to BINGO on Wednesday nights. In addition to her mother she is survived by two daughters Debra Ann Way of State College and Stacey Lee Kelley and her husband Robert Meyer of Boalsburg, and 3 grandchildren Ryan Lee Kelley, Shane Clair Way, and Catelyn Arlene Way. Also surviving is one sister Beryle Joyce Thomas of Pleasant Gap. Friends will be received at the Koch Funeral Home, 2401 S. Atherton Street, State College on Tuesday, November 22, 2011 from 6 until 8 p.m. Funeral services will be held on Wednesday, November 23, 2011 at 10:00 a.m. with Rev. G. Edwin Zeiders and Rev Eric Shafer officiating. Burial will be in Port Matilda Presbyterian Cemetery. Memorial Contribution may be made to the Arlene L. Smith Endowment, 1 Old Main, University Park, PA 16802. Arrangements are under the direction of the Koch Funeral Home. Online Condolences can be made at www.kochfuneralhome.com
To send flowers to the family or plant a tree in memory of Arlene Smith, please visit Tribute Store

A Memorial Tree was planted for Arlene
We are deeply sorry for your loss ~ the staff at Koch Funeral Home
Join in honoring their life - plant a memorial tree
Services for Arlene Smith
There are no events scheduled. You can still show your support by sending flowers directly to the family, or planting a memorial tree in memory of Arlene Smith.
Visit the Tribute Store
Print
Share A Memory
Send Flowers
Plant a Tree