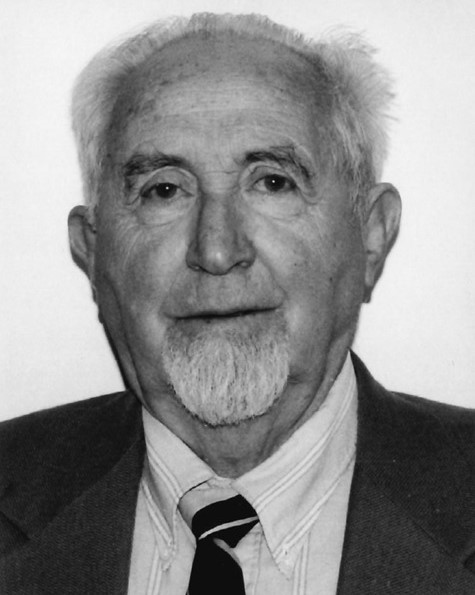 Ernest L. Bergman of State College died on Saturday evening. He left the following typewritten text for his obituary.

Born July 12, 1922 in Munich, Germany, he was a son of the late Willy J. and Julia Steiner Bergmann.

After his father's untimely death in 1925, he moved with his mother and brother to his mother's parents in Laupheim, Wittenberg, Germany.

Here he went to Grade School and completed 3 years of Latin School. Due to the political situation in Germany in 1936, he moved to his uncle and aunt in St. Gallen, Switzerland, where he finished his secondary education.

He attended the Kant. Ldw. Schule Schwand Münsingen, Kt. Bern (1939-1941) and received the diploma. He also worked on various farms and at Kant. Gartenbauschule Oeschberg-Koppigen where he received a certificate in vegetable crops and was certified as a fruit growing specialist.

In 1946 he left Switzerland with his mother and brother for the USA. Because he was a stateless person at that time he had to travel with a Nansen passport for refugees.

During the first winter in the USA he was pruning apple trees in Poughkeepsie, N.Y. In 1947 he moved to Oregon where he worked on his relatives' hops ranch and as a horticulturist on a large berry farm.

In January 1946, he came back to New York, N.Y. to meet his fiancée Alice H. Adler, who arrived then from St. Gallen, Switzerland. They were married on February 15, 1948 and went back to Oregon.

After receiving his U.S. citizenship in 1952, Ernie started working as an experimental aide at the Horticulture department of the Oregon State Agriculture Experiment Station in Corvallis, OR. In 1953 he was permitted to take courses and graduated in 1955 with the B.S. in Horticulture-Pomology, which included 2 years credit for his Swiss education.

From 1955-1958 he worked as a Special Graduate Research Assistant on Concord Grapes at Michigan State University and received his M.S. (1956) and Ph.D. (1958) in Plant Nutrition from the Horticulture Department.

Ernie started as Asst. Prof. of Plant Nutrition at the Horticulture Dept. of the Penn State University in 1958 and was promoted to Assoc. Prof. in 1963 and Professor in 1970. He retired as Prof. Emeritus in 1987. During his tenure he served on many Departmental, College, and University Committees (Chair, University Faculty Senate 1974-1975). He was an undergraduate and graduate student advisor (13 Ph.D.) and served on countless M.S. committees.

His activities encompassed teaching and research in horticulture crop production, plant nutrition, plant analyses, fertilizer use, and hydroponics crop nutrition. Ernie also had to help the Extension service when necessary and was involved in international agriculture with assignments in Argentina (three times 3 months), Uruguay, the Peoples Republic of China (five times), Senegal, and Mali. He was a member of the Agronomy Society, the International Horticulture Society, Sigma Xi, and Alpha Zeta, and attended with his wife many national and international meetings.

Ernie was elected Fellow of AAAS and the American Soc. for Hort. Sciences, where he served on the board as vice-president for international affairs and on many committees. He was President and also received "Man of the Year Award" from the PA Plant Food & Protectant Education Soc. in 1983 and Hon. Life Membership of the PA Veg. Growers Assoc. in 1987.

At one time Ernie pledged, if he ever again became a citizen he would serve his country, a pledge he fulfilled by his civic activities during 43 years in the Centre region. He was 10 years elected Ferguson township supervisor, served in many appointed positions in township, Centre Region Council of Government (chairman), Spring Creek Watershed Commission, and Centre County Planning Commission. He was past chairman and 25-year board member each of Patton Ferguson Joint (also cofounder) and University Area Joint Authorities. He also was a board member (13 years) of the Centre Life-Link EMS, Penn State Retired Faculty Staff Club (past president), and initial member of the Penn State Federal Credit Union (also past president).

Ernie was honored by Ferguson township in naming a street "Bergman Court" and in 2003 by citations of both the House of Representatives and Senate of the Commonwealth of Pennsylvania.

In addition to his parents and his brother Willy Bergmann, he was predeceased by his wife of 60 years, Alice H. Bergman who passed away in May 2008.

Share Your Memory of
Ernest
Upload Your Memory View All Memories
Be the first to upload a memory!