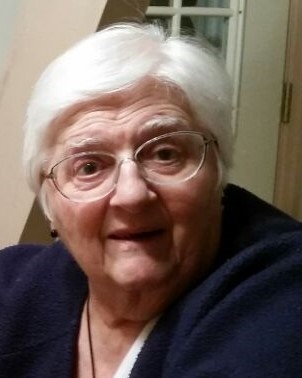 Helen Evans (née Makdad) passed away peacefully at the age of 92 on Sunday, August 30th surrounded by loving family. She is survived by her sons and daughters-in-law John and Lou Ann Evans of State College and Joseph and Dawn Evans of Morpeth, UK, and her grandchildren Jackie, Amanda, Joseph Jr., Christian, and Chase Evans. She is predeceased by her siblings Adele Allen, Ann McCoy, Albert Makdad, Charlie Makdad, and Ameene Makdad, and her parents John and Selma Makdad. Helen was born in Altoona, PA in 1927 and graduated from Altoona High School in 1946 where she was a member of the swim team. She fondly shared remembrances of growing up in Altoona and spending time in her parents' neighborhood store and beer garden. Helen went to the Adele Allen Beauty School, owned by her sister. She had her sons John and Joseph in Altoona, before moving to Greensburg in 1968 where she lived for many years. Helen decided to pursue a career in nursing and was the valedictorian of her nursing program as a mature student. She was active in the Greensburg ambulance service Mutual Aid and became a leading Avon saleswoman thanks to her outgoing personality. She worked in respiratory therapy at Westmoreland Hospital for 20 years before retiring to State College to live closer to John, Lou Ann, and their daughters. Helen was an active and social woman well into her later years. She was involved in her religious community at Grace Lutheran Church. Helen spent over 20 years volunteering in other community activities including State College Meals on Wheels, Centre Country Triad, and the Central Pennsylvania Festival of the Arts. She was a member of the State College Women's Welcome Club. In 2004 she was a recipient of the Governor's Crime Prevention Volunteer of the Year Award due to her work in Triad. In 2013 she was awarded the State College Meals on Wheels Volunteer of the Year Award. Helen, also known to family as Tito, showed love through being a wonderful and passionate cook. She loved to make fudge, cookies, and Lebanese food (especially baklava and kibe). She was a resident at Wynwood House at Greenhills in her later years, where she was well cared for. We thank the caregivers there, who treated Tito like family. Services and burial will be private and at the convenience of the family. Donations can be made in her name to State College Meals on Wheels. Arrangements are under the care of Koch Funeral Home, State College. Online condolences and signing of the guest book may be entered at www.kochfuneralhome.com.»(Do not delete this line. It does not print. Text that is to appear on web must be entered before this line)

Share Your Memory of
Helen
Upload Your Memory View All Memories
Be the first to upload a memory!