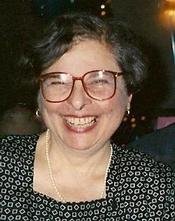 Beatrice "Bea" S. Walden died Monday, November 21 at The Fairways, Brookline Village, State College, PA at age 84, surrounded by the love of her husband Dan, her children and grandchildren. Bea was born late at night, to Max & Fannie Schulman on July 4, 1927, but because the doctor fell asleep and didn't record the date till the following day her legal birth date is July 5. Bea lived with her parents and brothers, Chaim and David on the Lower East Side in New York City. She graduated from Washington Irving High School. Bea attended Long Island University for one year and Hunter College for two years but had to discontinue after she became critically ill. Her recovery took close to a year but helped her decide to commit to her career in healthcare. With one year of nursing education at Beth Israel, she went on to become a phlebotomist and research lab technician at New York Cornell Hospital where she worked with children with cancer doing research on pediatric leukemias. In 1956 Bea met Dan Walden; they married in 1957 and celebrated their 54th wedding anniversary on October 12, 2011. They welcomed son Moss in 1961 and daughter Ruth in 1964. In 1980, nieces Aileen and Beth joined the family, and Bea and Dan were happy to have four children. In turn all four children are happily married and brought them twelve grandchildren and seven great-grandchildren. While Dan was in grad school at Columbia University they moved to Elmhurst, Queens, and then in 1963 to East Lansing, Michigan, for a three year stint at Michigan State University. In 1966 they moved to Harrisburg, where Dan helped open Penn State's Capitol Campus, while Bea taught hematology techniques at Harrisburg Hospital. In 1968, Bea, Dan, Moss & Ruth moved to State College, first on Ridge Avenue and then to Smithfield Street. Over the years, Bea worked as a lab assistant on soft money for Penn State, and as a lab assistant for endocrinologist, Dr. Sandler in Altoona, PA. She also served as the secretary to the Director of Hillel at Penn State. Bea and Dan were one of the early families to establish Congregation Brit Shalom. Bea helped to kosher the kitchen, served on the board of Hadassah, and presided over many affairs for the Jewish community. One of her many volunteer activities was serving on the chevra kaddisha, the volunteer holy society that cares for Jewish congregants once they had passed. Bea was a superb cook and in the '80's and '90's was the principal challah baker for friends and family and coordinated the annual break-the-fast, following the high holy days of Yom Kippur. One of our favorite memories was Bea sharing her experiences growing up on the Lower East Side during the congregation's annual Jewish Joke Fest. Over the years, Bea created a welcoming home and table for the students that Dan mentored, many of whom became extended family. In declining health for several years, Bea was diagnosed with Parkinson's disease and in 2005 she entered the Fairways. Our family wishes to thank the wonderful staff at The Fairways for their years of loving care for Bea and for the hospice services of Home Nursing Agency. At her passing she leaves her loving and devoted husband, Dan, son Moss (Lisa) Walden of Maple Glen, PA, daughter Ruth (Dan) Walden-Turek of Lansdale, PA, nieces Aileen (Kirk) Galley of State College, PA and Beth (Gene) McGonagle of Dresher, PA. She was Grandma Bea to Jordan and Yale Walden, David (Jaimi) Williams, Robin Woodring, Deanna Walden-Turek, Max and Emma Galley, James and Ian McGonagle, Danielle (Chris) Deck and Jill and Jordan Turek and seven great-grandchildren, Kaylee, Davin, Connor, Mason, Owen, Hayden and Ethan. She was predeceased by her parents and brothers Chaim and David. A memorial service will be held at Koch's Funeral Home, 2401 South Atherton Street on Wednesday, November 23, 2011 at 2 pm, followed by internment at Centre County Memorial Park. Our family will be sitting shiva at niece Aileen Galley's home, Wednesday evening, November 23, 2011 at 7 pm. For those wishing to honor Bea's memory, please consider a donation in her name to Congregation Brit Shalom, 620 East Hamilton Avenue, State College, PA 16801. Online condolences may be made at www.kochfuneralhome.com.
To send flowers to the family or plant a tree in memory of Beatrice Walden, please visit Tribute Store

A Memorial Tree was planted for Beatrice
We are deeply sorry for your loss ~ the staff at Koch Funeral Home
Join in honoring their life - plant a memorial tree
Services for Beatrice Walden
There are no events scheduled. You can still show your support by sending flowers directly to the family, or planting a memorial tree in memory of Beatrice Walden.
Visit the Tribute Store
Print
Share A Memory
Send Flowers
Plant a Tree