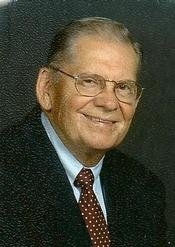 Charles L. Myers, Sr., 82, of State College, died Saturday, November 27, 2011, at The Fairways at Brookline Village. Born in Williamstown on November 27, 1929, he was the son of the late Charles "Bunny" and Myrtle Llewlyn Myers. On August 11, 1948, he married Lucille Crossley Myers, who preceded him in death on May 17, 2010. He is survived by three children, Chuck Myers and his wife, Paula, of Sterling, Va., Lee M. Myers and his wife, Cynthia, of State College, and Linda M. Eisenhower and her husband, Dave, of Succasunna, N.J. He is also survived by a sister, Jean Louise Lohin and her husband, Charles, of Lancaster, eight grandchildren, Danielle Card, Jennifer Myers, Colin Myers, Gregory Myers, Jessica Myers, Wesley Myers, Matthew Eisenhower, Michael Eisenhower and one great-grandson, Jacob Card. He began working for The Van Heusen Company in 1948 and continued with them his entire career of 42 years. He began as a Management Trainee in Pottsville, PA and relocated to Alabama, Arkansas and back to Alabama, where he retired from Van Heusen as Senior Vice President Operations. Charlie had served on many different boards in each community where he resided. Such as, Rotary Club, American Cancer Society, Clemson University, Chamber of Commerce of Arkansas, Business Council of Alabama and Ft. Rucker National Bank, just to name a few. He and his wife, Lucille, of 63 years, retired to State College, Pa to be closer to their family. While in State College he was a member of the Rotary Club and volunteered with SCORE (Counselors to America's Small Business). He was also a member of Centre Hills Country Club. He enjoyed golfing, traveling, photography, music and life - but most importantly his family. He was a member of Mt. Nittany United Methodist Church. Visitation will be held on Friday, December 2, 2011 from 1-2 pm at Koch Funeral Home, 2401 S Atherton Street, State College. His funeral will be held immediately following at 2 pm at the funeral home with the Rev. Howard Woodruff officiating. Memorial contributions may be made to the University of Texas M.D. Anderson Cancer Center, PO Box 4486, Houston, TX 77210-4486. Arrangements are under the care of Koch Funeral Home, State College. Online condolences may be made at www.kochfuneralhome.com.
To send flowers to the family or plant a tree in memory of Sr. Myers, please visit Tribute Store

A Memorial Tree was planted for Sr.
We are deeply sorry for your loss ~ the staff at Koch Funeral Home
Join in honoring their life - plant a memorial tree
Services for Sr. Myers
There are no events scheduled. You can still show your support by sending flowers directly to the family, or planting a memorial tree in memory of Sr. Myers.
Visit the Tribute Store
Print
Share A Memory
Send Flowers
Plant a Tree